Overheard in the cereal aisle… 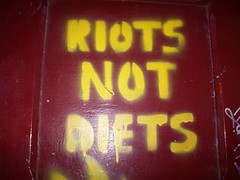 “Can we get these ones? They’ll make me thinner”

And is it just me, or would you have to eat at least half a dozen boxes to feel full?

Photo by Lucy A Little, shared under a Creative Commons License.