Well, if you will have women MPs…

The Telegraph has decided to build a whole story around the fact that some of the Labour MPs calling for a leadership election happened to be women.

Here’s the photo they used to illustrate the story: 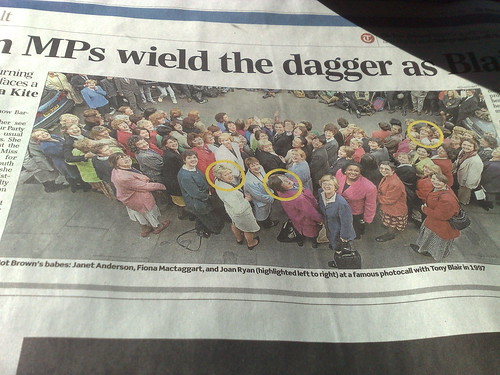 And here’s the lede:

It began as Siobhain McDonagh stood nervously on College Green outside the Houses of Parliament explaining live on television why she had requested leadership nomination papers to be sent to her before the Labour party conference.

The development was slightly surreal. After all the Labour big beasts who have stirred trouble to no lasting effect – David Miliband, Charles Clarke, Alan Milburn, Stephen Byers, to name a few – could a former Blair babe be the catalyst for a real rebellion against Mr Brown?

But the two notable thing about it being Siobhain McDonagh that has kicked off this particular rebellion are that a) she has been completely loyal, never voting against the government in 11 years, and that b) she is a minor political figure – her biggest role has been assistant whip (note to readers outside the UK: whips are responsible for getting MPs to vote with the government), and Wikipedia lists her noteable moments as spending the most on postage of any MP, and getting a hospital relocated so it served her constituents better – no doubt a very good thing to do, but not a memorable moment in British politics.

Which makes it hard to understand why the Telegraph chose to make this all about her being a woman – or, even worse, a “Blair babe”.

Then we get this line:

She sounded like a woman facing an emotional crisis, not a government minister in the midst of knifing the Prime Minister.

I mean, what the fuck? Silly McDonagh gave away she’s a WOMAN, and even worse she had untidy emotions (only women have emotional crises) – and it’s totally ridiculous that a minister that has been absolutely loyal (to a fault) to her government might get a bit emotional at a moment like this?

If you look at the actual photo of “Blair’s babes”, you’ll see only three out of all the women in the photo have been circled. This isn’t a story of women “weilding the knife”, or turning on the government en masse, it’s just that this rebellion just happens to have a few women involved. But I think the Telegraph’s agenda is pretty clear – Labour put the emphasis on women’s representation in Parliament; now look what happened, they got stabbed in the back by those untrustworthy “Blair’s babes”.

Even the Telegraph’s main coverage of the unfolding political drama tell the lie to the idea that women “weilded the knife” – naming the ringleaders as two male MPs: Jim Dowd and Graham Stringer. Of the eight MPs who have asked for nomination papers, half are men, half are women. Perhaps the presence of so many women’s names in a political story has the newspaper a bit befuddled?