Last weekend was the first Feminism in London conference. Charlotte Cooper reflects on the day in this guest post. You can also see Jess’ photos from the day on Flickr 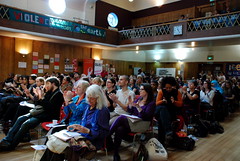 While the word conference would normally rouse feelings of fear and

boredom in me, there’s something about the prefix Feminist that alerts

me to the opposite. As a not-too-internet-based feminist, I miss out

on a lot of the group discussion that takes place in online forums, and

means I get to catch up on big ideas and debates.

The Feminism in London conference, held on Saturday 11th October, was

Hall, famous for encouraging free speech and progressive thinking. I

couldn’t really think of a better place to push the feminist psyche.

workshop on “what’s wrong with pornography” or 90 minutes on

objectification, there was plenty to be thrilled about. Women and

asylum, masculinities in peace and war and media training workshops

an ever pressing media interest in feminist perspective (perhaps

cemented by the presence of the BBC film crew).

interesting and invigorating, and once the group has established the

difference. People were searching for ways to make real positive

and volunteering as medical, legal and companion aids.

At the very least, the day offered an opportunity for people to

socialise and build bridges and strengthen the feminist community in

its many guises. But, the best things that occurred was that people

left energised and excited, committed to direct action in its many

forms, and that’s exactly what we need.