Victim blaming carries on as usual:

Anthony Francis has been sentenced to five and a half years in prison for raping a woman seven years ago. He was caught on DNA evidence. During the trial, reports the Daily Mail, the defence barrister tried to win a reduced sentence, on the basis of Facebook photos showing the victim “laughing and smiling at a fancy dress party in the years since the rape”.

Yeah, he really tried to get time off the sentence because the woman who his client raped has had a smile on her face and attended a fancy dress party in the seven years since the crime.

Mr Salter, a member of the home affairs select committee, said: ‘This quite extraordinary and callous attempt by the defence barrister to suggest that rape victims are not entitled to a life of their own is a shameful act and does no credit to our criminal justice system.’

Meanwhile, one of our readers wrote in to alert us that her MP Harry Cohen has made a speech calling for the law to be changed so “I was sleepwalking” isn’t a defence for rape:

I am concerned about the current legal precedent. Anybody up in court on a rape charge could get a few friends and family to claim that he sleepwalks, and he will almost certainly get off. Rape is traumatic and damaging to the victims. As well as suffering the physical assault, they also suffer emotionally, often taking on the guilt of feeling that they cannot get justice.

Over at Comment is Free, Belinda Brooks-Gordon has an extremely problematic post about legislative plans on prostitution/sex work. If I mention that she relies heavily on minimising/denying the evidence on trafficking, and indeed puts “trafficked” into scare-quotes, you get the idea. Irrespective of differences of opinion on what legislative strategy is best on this issue, how anyone can build their argument on the idea that sexual slavery isn’t such a big deal is beyond me. Vile.

We (almost completely) missed “Love Your Body Day” – but surely that should be every day, right? Feministing has a good suggestion on how to celebrate

70% of LGBT young people “don’t feel safe in school” – Milly has more over at Lesbilicious. Could a campaign like this help the situation?

stoat at Feminist Philosophers records a confusing account of confusion. Note use of the word “unjustly”!

The US is remaking Absolutely Fabulous – why? It’s a mystery alright.

Rio Ferdinand thinks that England has done poorly in recent years because of the players’ pesky “Wives and Girlfriends”. See the Guardian for more.

Over at the new online mag QBG (Quirky Black Girls) Takkara draws some lessons about patriarchy from a scene on a bus.

A reminder about next week’s pro-choice protest from Stroppyblog.

And finally, for the record, yesterday’s disgusting Daily Star cover: 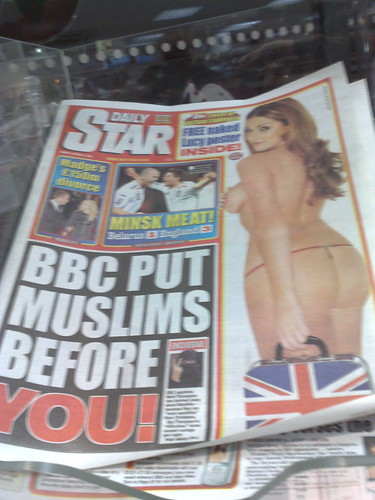 The story was about the shocking decision by the BBC that it won’t broadcast bigotry aimed at Muslims.