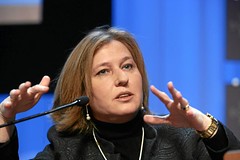 An Orthodox Jewish newspaper in Israel has refused to print photos of Tzipi Livni, set to become the country’s second female prime minister, because she is a woman, reports Reuters*.

Citing concerns for feminine modesty, the ultra-Orthodox refuse to publish images of women in their newspapers — a core source of information as the reclusive community generally shuns the television, Internet and most radio stations….

At meetings with religious legislators on forming political partnership, Livni dons demure skirts and wrist-length jackets, not the pant-suits she usually favors.

Such deference irks many Israeli feminists, who argue it risks papering over the cultural rift in a mostly secular Israel whose Supreme Court and parliament both have women presidents.

According to the Mail, newspapers have also said they will not publish Livni’s first name, refering to her only as ‘Mrs Livni’. It is common practice for Haredi newspapers to ban images of women, and blur out women’s faces.

While influential Israeli newspapers literally make Livni invisible, newspapers in Syria and Canada focus only on her looks – but Reuters doesn’t recognise this as problematic, of course, leading its story like this:

The Syrian state press has described her as a “Mossad beauty.” A Palestinian cartoonist compared her to the Mona Lisa. One Canadian report called her “naturally blonde with eyes as blue as the Mediterranean.”

Yet Tzipi Livni, asked by Israel’s president on Monday to form a government following Prime Minister Ehud Olmert’s resignation, remains largely faceless when it comes to her country’s powerful ultra-Orthodox Jews, or haredim.

Just as an aside, I’ve not been following this election at all, and I’m not sure what Livni’s politics are.

Photo shared under a Creative Commons license, by the World Economic Forum

*Note: Another story about women’s rights consigned to the ‘Oddly Enough’ section on Reuters – sigh