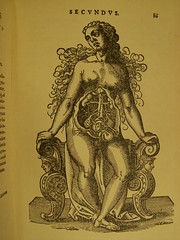 Anecdotal evidence abounds that doctors and researchers work from the assumption that the standard body is white, male and heterosexual.

But a researcher in the US has conducted a study of the images appearing in text books used in some of the most prestigeous medical schools in Europe, Canada and the US.

According to Science Daily, 16,329 images in 12 key manuals were analysed in the research, carried out by María José Barral, a medicine professor at the University of Zaragoza.

Three times as many male bodies as female ones were illustrated in the six anatomical textbooks and six texts studied (14% compared to 4%, while in the remaining images it was not possible to deduce the gender of the body)

The picture is worse in European than North American manuals:

The six North American manuals studied used male bodies in 17% of cases and female ones in 5% to illustrate “neutral body parts”, while the six European ones used male images 12% of the time and female ones only 2%.

People of Caucasian ethnicity were the only ones represented in nine of the 12 manuals (all the European ones and half the North American ones), and were in the majority in the other three. Only one of the textbooks studied showed “parity in male and female images” and represented other ethnicities, although Caucasians still predominated.

Barral also drew some conclusions about the gender stereotyping demonstrated by text book authors – for example, most of the images of hands were male, which she suggests could reflect an implict belief that “manipulation, a sign of our species’ evolution” is male.

Does it matter? The answer is a firm yes:

“Medical research in terms of the diagnosis, treatment and prevention of diseases has been focused on this model of white, heterosexual men, who are a minority on this planet, and this does not reflect true diversity,” the researcher said.

The scientist says many of the doses for pharmaceutical drugs have been calculated using this body model as a basis, without taking differences into account, and that this is only now being corrected. “You are prescribed a dose for another body,” she stressed. “Using only one body type as a model and treating the rest as variations is dangerous for health,” she told SINC.

Image shared by rosefirerising, under a Creative Commons license