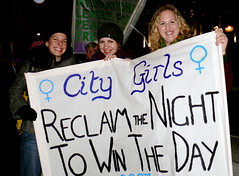 Heading out to Reclaim the Night in a few hours, but in the meantime here’s a mini-round-up:

Talking of RTN, the LGBT domestic violence helpline Broken Rainbow has endorsed this march and other events taking place around the country.

Over in the US, Obama’s transition team has published his agenda for civil rights, including lots of great stuff – notable bits and bobs includes passing the Equal Pay Act, and support for legislation extend protection from workplace discrimination to sexual orientation and gender identity. If everything on this agenda is implemented… well… :-)

16-year-old Eri Yoshida has become the first female professional baseball player in Japan. She’ll be playing alongside and against men. Japan Times has more.

The UK government is working on a guidebook on gender identity for schools.

Students at Queen’s University in Canada will be challenged by their peers if they make sexist, racist or homophobic comments, according to Shameless.

Bras for men are a hot trend in Japan, according to the Guardian.

In the US, a Latina congresswoman is under fire for having a baby out of wedlock. Seriously. Linda Sanchez’s critics also think abortion causes immigration. Vivirlatino has the full, sorry, story (via Feminist Peace Network).

Boing Boing’s Cory Doctorow celebrates the kids’ book ‘Free To Be… You and Me’.

Sociological Images found a hilarious ad for sanitary pad. I particularly like that the pad is hovering in the air like a UFO…

Paula R Stiles wonders why diversity and quality are seen as mutually exclusive in sci-fi and fantasy – pointing out how truely absurd it is that “speculative” fiction is so conservative on issues such as race and gender. (Via Feminist SF – The Blog!)

The Tories continue to select overwhelmingly male candidates – what a surprise.