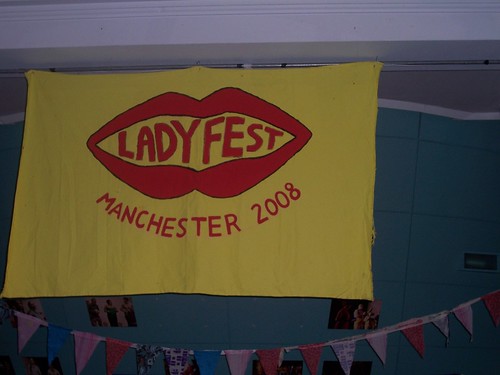 I spent Saturday at Ladyfest Manchester, and although I couldn’t stay for the bands in the evening, I had a really great day. As usual for a Ladyfest Festival it was difficult to decide what to do as the day was so packed with options.

The morning saw me warming up gently with some Tai Chi for self defence – something I’d never done before, and found useful and fun. Somewhat scarily the BBC were filming us for a BBC Four documentary on Feminism, but I still managed to get out of the double hand lock using the “tea tray” technique!

I then rushed upstairs for a discussion on bisexuality led by Jen, Editor of Bi Commuinity News. The atmosphere was friendly, frank, and supportive as bi folks and allies shared their questions, views and experiences. Particularly interesting was a discussion about the discrimination and suspicion bisexual people receive from some sections of the straight world and gay/lesbian community.

I grabbed a veggie pastie (delicious) and headed to the art gallery and craft area, stopping off to have my photo taken for Jade French’s Riot Grrrl Portrait Collection and chatting with various people along the way. Unfortunately I didn’t have time to catch any of the interesting sounding films being shown. 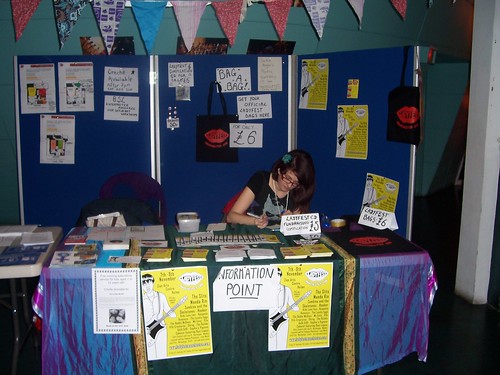 The afternoon saw the main session of the day, a panel discussion on feminism and counterculture. Appropriately for Ladyfest, the discussion focussed on the involvement of women in culture, arts, and music. Prof Sheila Rowbotham kicked off by discussing her feminist idols such as Mary Wollstonecraft and raising the question “How can we assert difference and at the same time, transcend it?”.

Amelia Fletcher then discussed how her negative opinion of feminism (based on stereotypes and misrepresentation) radically changed with the advent of Riot Grrrl. She related some pretty damning statistics on how mainstream indie music is male-dominated, and how this leaves a lack of role models for young female artists. I jotted down some of the stats. Of the 64 people in bands in the Indie Chart Top 30, only 4 are women. Of the 77 people in bands on the Xfm playlist, only 1 is a woman.

Some would say who cares? But I would argue that women’s invisibility in culture is very important. What are we missing if half the human race is not represented in particular genres of art, music and culture?

On that topic, Marion Leonard went on to discuss her research into gender in the music industry. She explained how the terminology used in the music press – such as “Women in Rock” – can act to reinforce women’s underrepresentation.

Kate Graham, co-founder of Guerilla Cabaret explained the reasoning behind the project, the domination of men in the world of theatre and performing arts and how Guerilla Cabaret is attempting to provide a space for emerging female artists. I personally found it fascinating and wish them all the best with the project.

After some audience debate, I headed out to the lobby to purchase a stack of zines from Marching Stars Distro. 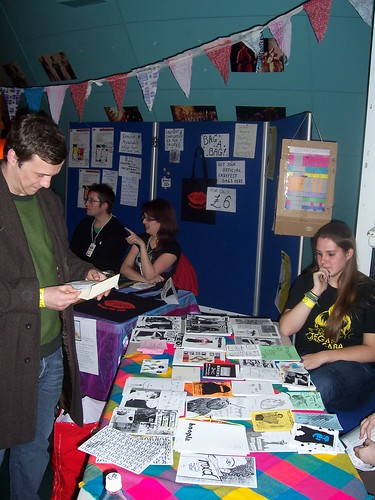 Before I had to leave to catch my train, I just had time to pop down to the Nua Workshop, which wasn’t really a workshop but more of a sales pitch for the sex shop’s products, but it was enjoyable nevertheless.

My views on Ladyfest? I love how every Ladyfest is different in its own way. I love how the atmosphere is supportive, open and welcoming. I love how the discussions are respectful and open-minded. I like the opportunity to just have have fun in a feminist context and experience some picture of what a feminist community might be like. I like seeing familiar faces and meeting new people.

In writing this post, I feel that I’m expected to make some criticisms, as pretty much every feminist event and organised activism these days are frequently subject to wide criticism and analysis by the feminist community. Of course, this self-questioning, self-critical attitude of feminists is something we can be proud of, and criticism and learning is a vital part of any social movement. We’re always striving to do things better, and that’s a good thing.

But I personally tend to focus on the positive. So I’d like to applaud the achievement of the volunteers in organising this event. I admire and respect those women and men who dedicate a year of their lives organising events like this in the face of very many difficulties – certainly no mean feat.

No Ladyfest is perfect – how could it be? Each one grows and morphs from the one before, and lessons are learned. Personally, I had a really interesting day and can’t wait for the next one. Anyone know where it is?