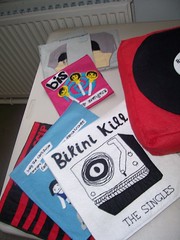 Like Catherine, I had a wonderful time at Ladyfest Manchester, and am thoroughly impressed by the lovely people who worked so hard to put it together.

I spent the afternoon learning more about zines in a workshop with Melanie of Reassess Your Weapons and Colouring Outside the Lines fame, and Gill from feminist magazine Subtext. The whole zine phenomenon had somehow passed me by, and it was really inspiring to see the effort and dedication that goes into producing such an eclectic range of publications. Zines seem a great way to express yourself and connect with other like-minded people, while leaving them on public transport, in libraries and independent stores can be a nice bit of grassrooots activism (though I of course can’t condone sticking counter-culture zines into mainstream women’s glossies, oh no).

After marvelling at the artistic genius of the ladies in the craft fair (crayola scarves! felt zines! bloomers!), my friend and I settled down to watch Girls Rock! The Movie. It’s a really beautiful and moving documentary about a camp set up in the US to build girls’ confidence and self esteem through teaching them to play instruments and form bands. I genuinely can’t count the number of times I felt tears streaming down my face during the film – it brought back so many memories of the feelings of inadequacy, insecurity and body hatred I had to deal with growing up and it was shocking to see these expressed by so many young women. The camp experience really helped them deal with these kids of feelings, and I’m excited to see there’s one being planned for the UK. Trailer below.

We carried the discussion into the bar and then headed downstairs for some musical treats, including (hooker), Vile Vile Creatures and the truly spectacualr The Slits, who had everyone shaking their pum pums (I think you had to be there…). Sweating like a beast, I jumped in a taxi and waited for my train home ( a wait which was much improved by the wise cracking transvestite in Piccadilly Spar – thanks!)

Congratulations again to all those who organised Ladyfest, it was great to engage with so many creative and politicised people, not to mention flail my long limbs around to female led bands for once: can’t wait for the next one.

I’ll have a wee bit more soon on some of the cool projects that people I met are involved in.