New Zealand had an election too!

Labour has been ousted in the New Zealand election, reports the Guardian:

New Zealanders have voted for their first conservative government in almost a decade, ending the tenure of one of the world’s longest-serving elected female leaders.

The indigenous Maori party, led by Tariana Turia, added another seat to the four it has held since 2005 but fell short of winning its target of all seven Maori seats. Key may invite the Maori party to join his government to strengthen its majority, something Turia has said would be considered. 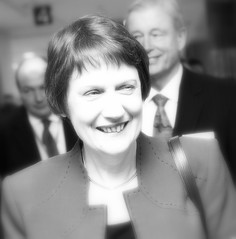 I don’t know nearly enough about New Zealand politics to comment on this one – but The Hand Mirror has a great analysis on the number of female MPs.

The number of woman MPs increased by 1 bringing our percentage of XXers in the house to 33.6%. This result means New Zealand bounces up two places on the IPU’s league table for the percentage of women in parliament, ranking number 14

Women’s political representation is in a sorry state if adding one female MP to any parliament causes the country to jump two points in the global rankings.