Our report on Reclaim the Night 2008

More than 2,000 women marched to take back the streets of central London last night, in protest against male violence against women, for the fifth national Reclaim the Night event since it’s revival in 2003. Despite the bitter chill (it was the coldest night of the year so far!) it was the biggest march and certainly one of the loudest!

The reasons Reclaim the Night is needed are grim – violence against women is endemic, and the usual response is to tell women to curb our behaviour – as one of the speakers at the rally put it, this is a “mental curfew” imposed on all women. (The march is held in the lead-up to the International Day for the Elimination of Violence Against Women on 25 November.) 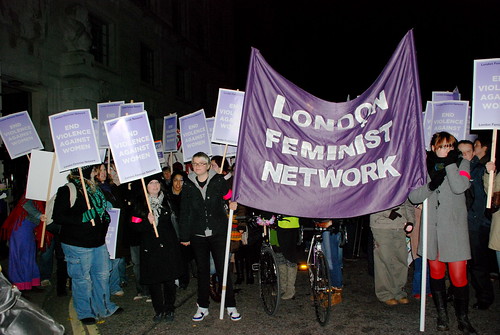 London Feminist Network banner at the front of the march

But the atmosphere was joyful and inspiring as women demonstrated on behalf of their rights on the route which stretched from Whitehall past Trafalgar Square, through Soho and the West End, to the rally in Friends Meeting House on Euston Road. The protest – which at its most compact took about 10 minutes to filter past bystanders – was a flurry of beautiful banners, placards, costumes, happy faces and hundreds of women shouting their lungs out with chants calling for safe streets and safety in their own homes. There was even a singing section and a band, alongside whistles and chants.

For the most part, the reaction of the crowds was positive – with plenty cheering us on and many more asking interested questions. The Pro-Feminist Men’s Group held a small, candle-lit vigil at the Edith Cavell memorial in support of the march – an event which all pro-feminist men should be encouraged to attend in future years to show their concerns about male violence against women. 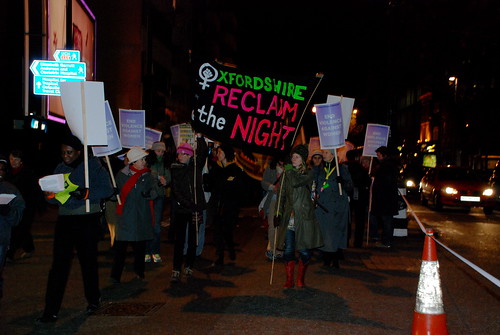 As has become tradition, Spearmint Rhino was the temporary focus of a slow-down of activity. But alongside the now traditional “women are not for sale” chants, there was also a demonstration for sex workers’ rights to work and work in safety.

The Friends Meeting House was packed out for the rally, with marchers staying on to check out the stalls and hear the speakers. And it was certainly worth it.

Jennifer Moses from the teachers’ trade union NASUWT kicked off, with our own Kate Smurthwaite signing and Rebecca Morden compering. She was followed by Aravinda Kosaraju from the Coalition for the Removal of Pimping, who movingly told of the work the organisation does to combat children being groomed into prostitution. 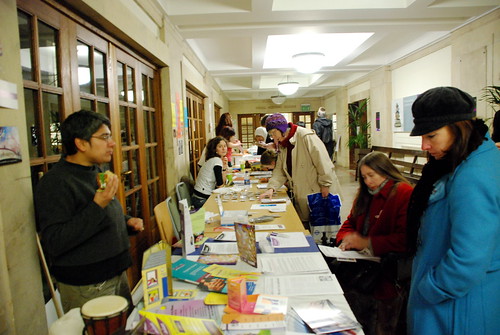 She said that young girls – the vast majority of children in prostitution the group encounters are girls – are seen as “little tarts”, even though some are as young as 11. Although the rape conviction rate hovers at a shocking 5% in England and Wales, the conviction rate for cases in CROP’s experience is more like 2%, she said.

Next to speak was Gita Patel, from Imkaan – an organisation that supports refuges for Asian women. She said that 50% of refuges for black and ethnic minority women have already been lost, and, again, movingly reminded us why it’s so important that these services exist for women and children hit by the “disease” of domestic violence. 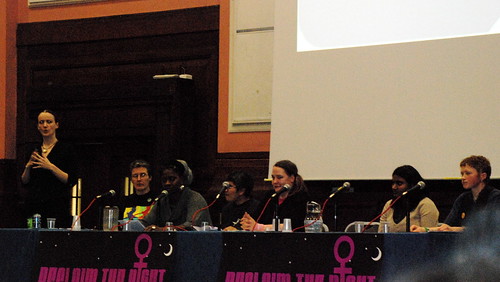 Jane Gregory from Rape Crisis Bradford – and also the vice-chair of Rape Crisis England and Wales – gave an update on the situation for the centres. Although the government’s “emergency fund” meant that nine centres stayed open this year, and 11 were not forced to cut services, she said that many were forced into a situation where they were “clinging on and waiting” for the money for months. Meanwhile, 11 centres will be at risk next year, she said.

Finally, the rally was closed with a typically rousing speech from Finn Mackay, who of course was the one to restart RTN five years ago. She got us all fired up, and the response from the crowd was a standing ovation. 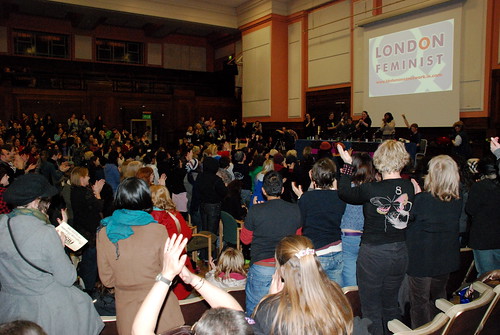 You can see all my photos from the march on Flickr. I’ve also added them to The F Word pool on Flickr – feel free to add yours too :-)

Reflections on the march from bloggers and others – I’ll add to this list as I spot posts:

Shut Up, Sit Down

(I was going to update this with a full list, but I can see that womensgrid has already put one together – so go check theirs out.

Were you at the march? A veteran RTNer, or attending for the first time? If you have any reflections on the protest, please add them as a comment or email us.