‘Virginity’ is an outdated concept 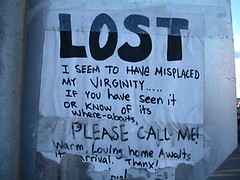 We prize the idea of ‘virginity’ in our culture, whether valorising it in the form of ‘purity’ balls, or pillorying ‘virgins’. But it’s an extremely problematic concept, bolstering up a highly heteronormative hierarchy of what is and isn’t defined as sex.

Over at Scarlateen, fabulous Heather Corinna answers a question from a young bisexual woman who wants to know how she can “tell” when her and her girlfriend have lost their ‘virginity’. Her answer chimes so perfectly with how I feel about the misguided notion of ‘virginity’ that I had to share.

Since virginity as a concept has historically nearly always been — and usually is still — about heterosexuals and also about marriage, when we talk about virginity, we’re going to find ourselves talking about heterosexuality, heterosexism and heteronormativity a lot. If you’re looking in history for inclusion of lesbian women, or bisexual or heterosexual women who have had sex with other women, when it comes to concepts of virginity, give on up. There’s nothing to find.

However, even for heterosexual women, defining when they have had “real” sex as when they have had vaginal intercourse is a strange thing to do since a majority of women, vaginal intercourse isn’t an activity where they are even likely to reach orgasm or experience as much pleasure as they might with other activities, like oral or manual clitoral stimulation. Like so much else when it comes to virginity (and even sexuality as a whole) as a concept, this is another area where what sex is and is not is being defined not based on all the bodies and persons involved, but on one: while most women do not reach orgasm from intercourse alone, most men do, and that’s who, through most of time, has also been in charge of defining sex and virginity.

Lastly, I think the idea that when we choose to be sexual with someone else, we “lose” something is pretty backwards. When we choose to share our sexuality with someone else who also wants to share theirs with us, we are creating something which did not exist before, not losing something or taking something away from someone. We’re making something new. While sometimes the notion of sex as loss is about loss of childhood, the idea of sex as a loss mostly tends to come from places you probably — especially as someone who loves women — would not appreciate; from ideas about women as property, women as nonsexual beings, women’s sexuality as an object or something to “give” to a husband or man who “takes” it away, or women’s sexuality as something rapists rob from us. One would hope that those kinds of notions would be left well outside the bedroom in a healthy sexual relationship between equals and partners who are seeking to share mutual physical pleasure and emotional care or love.

Photo by smallestbones, shared under a Creative Commons license