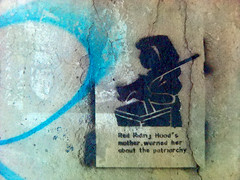 The Manchester branch of Women Asylum Seekers Together is setting up a solidarity group.

The ‘Yes Means Yes’ anthology has been published – it was co-edited by Jessica Valenti from Feministing, and includes an array of brilliant writers from the US feminist blogosphere, including Latoya Peterson from Racialicious, Miriam and Samhita from Feministing, Cara Kulwicki from The Curvature, Heather Corinna and others, such as Julia Serano.

Kirsty at Other Stories considers why feminism is such a dirty word, in the context of an interesting exchange whereby Kate Winslet’s assistant tried to downplay it when the actor said she was a feminist.

The Bush administration has introduced a regulation which allows health workers to refuse service on the grounds they have a ‘moral objection’ – with sweeping ramifications for women’s health, particularly on abortion and contraception. Jill and queenemily break down some of the implications.

Lesbian and bisexual teenage girls are at greater risk of pregnancy, sexual violence and harassment than hetrosexual girls, according to a study which Milly writes about over at Lesbilicious – horrifyingly, the study concluded that the difference in pregnancy rates (3% of lesbian teenagers compared to 1% of straight teenagers in 2003) is explained by sexual violence.

A survey of Muslim women in the UK by the Centre for Islamic Pluralism has found some feel imams are biased against women when ruling on Sharia law.

Meanwhile, in the US, a judge arrested and imprisoned a Muslim women for refusing to remove her hijab

Sokari posts at Black Looks about how the British empire was responsible for introducing anti-‘sodomy’ laws, which remain in place today in more than 36 countries.

Nine pets a week are reported as abused by perpetrators of domestic violence – womensgrid has more.

The judging panel for the Orange Prize 2009 has been announced, and includes Bidisha and Kira Cochrane from the Guardian.

Londoners put 26 January in your diary, it’s Rock Against Rape.

Can a sex toy be feminist, in and of itself?

Photo by dpwolf, shared under a Creative Commons license