The number of reported rapes in the US has soared by 25% in only two years, while reported domestic violence has sky-rocketed by 42%, according to a report by Human Rights Watch.

Four men kidnapped and gang raped a lesbian in San Francisco – the case is being treated as a hate crime, according to the Chronicle, “because of comments the suspects made about the victim’s sexual orientation”. Melissa has more.

Elsewhere in the US, another case has surfaced about police brutality and assault. This is a local news report, but be warned the footage is very disturbing:

The US was among more than 50 countries who refused to sign a UN statement on decriminalising homosexuality.

The Albert Kennedy Trust, which matches young LGBT people who’ve been kicked out by their families with foster carers, is seeking donations.

A Muslim woman is suing a central London bar, saying she was sacked for refusing to wear a dress she found too revealing, and because managers failed to protect her from being approached by patrons wanting to buy sex with her, reports the Daily Mail. The club is Rocket in Mayfair. (Via Feministing

Prop 8 overturned same-sex marriage in California – leaving thousands of people who’d married during the months before it passed in legal limbo. Now Ken Starr is attempting to get those marriages legally nullified. The Courage Campaign is seeking help with a photo project, meant to highlight the huge cost for families that this would forcibly divorce. Contribute, or watch the slideshow of submissions so far. (H/T Sinclair)

Some good things are happening though!!

Tessa Lewin has a great column about the potential of technology in helping women and other marginalised groups tell their story. She mentions Stories of Change, a documentary following five Bangladeshi women doing work traditionally carried out by men:

We need more images of women that challenge popular orthodoxies and narratives. Images of, for example, barefoot pregnant African women, reinforce un-nuanced, negative stereotypes of woman as victims. By ensuring women have access to these technologies, we can populate the media with grassroots knowledge and cultural artefacts from new perspectives.

Toni Morrison, Gabriel Garcia Marquez and Seamus Heaney have launched a literary prize to recognise the work of Spanish-language women writers living in the US and Mexico. The Aura Estrada Prize is named after a writer who died at the age of 30.

TransGriot posts about the first ever pan-African meeting of trans activists. Meanwhile, the US Congress has got its first trans staffer. 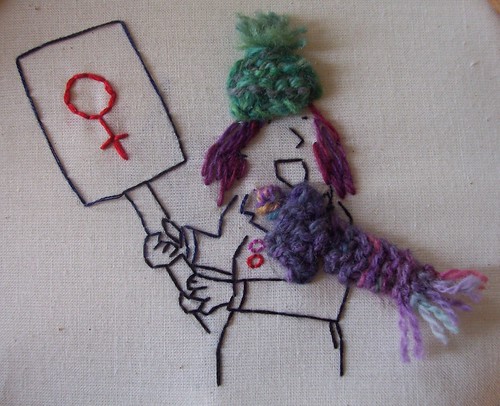