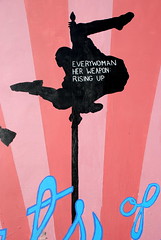 Just a quick note to say I’ve finally put up the comments on features and reviews received during October. You can find them here!

Anaya’s piece about magazines for young girls got an overwhelming (and positive) response.

Karen James’ article about the bad experience she had when she went to get emergancy contraception also prompted a big response – mostly, dishearteningly, from women sharing similar stories.

As usual, though, there’s a massive wealth of comments here on articles new and old.