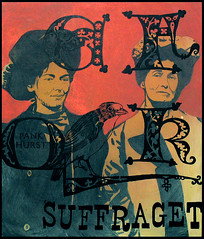 I love suffragette stories as much as the next feminist, but this story by Julie Burchill in The Sun is… baffling.

The story is full of breathless lines like this:

Those prim and proper Edwardian ladies looked so weak and wet, all those bonnets and bustles.

BUT THEY WERE SO HARDCORE!

Capitalisation and emphasis theirs, not mine.

You’ve got to love this:

Forever slashing paintings, smashing windows, setting fire to post boxes, chaining themselves to railings, vandalizing golf courses, hiring out boats and sailing up the Thames shouting abuse at Parliament through loud-hailers, and throwing themselves under racehorses — they seemed to me to be the best girl gang in the world.

And at the end of their fun and games there wasn’t the long, lonely drop of the car going over the cliff or the bleak months in the juvenile correction centre.

No, there was the right to vote! Kicks AND justice!

But, well, that aside, this story is a bit… problematic. First of all, as you probably know, the first women to get the right to vote was limited by age, education and property. The Sun says:

It was some sort of progress, no doubt, but its very randomness was insulting.

Obviously this is a total misrepresentation, of what was a clear policy of denying basic democratic representation to working class & young women.

Burchill swings wildly around in this piece, from enthusiasm over the suffragettes, to condemning terrorism, to Page 3 and an attack on Clare Short.

Interestingly, ten years later she was still in the Commons, but this time hosting a meeting of Hizb ut-Tahrir, the extreme Islamofascist party which then-Prime Minister Tony Blair sought to ban.

Among numerous other examples of bigotry, the manifesto of this vile organisation states “the primary role of a woman is that of a wife and mother”, “segregation of the sexes is fundamental”, “women are not allowed to take charge of ruling nor to practise any actions of ruling” and “within their public life, nothing of the women’s body is to be revealed, apart from her face and hands”.

So . . . an organisation which seeks to force women to hide their bodies should not be banned, according to sister Clare.

But an institution that gives women choice on whether or not they show their bodies, such as Page 3, should be banned!

Which she then compounds:

Open a magazine and you’ll find some female cretin wittering on about how stressful it is having to vote once every four years, and if she was only allowed to lick out toilet bowls wearing a Cath Kidston straitjacket, she’d feel like a real woman for once.

Do us all a favour, you ignorant nostalgia freaks who should know enough about the dreadful oppression of your kind to appreciate the beauty of choice, but instead bleat about what a “tyranny” it is.

Why not put your money where your moan is and move to one of the world’s many Muslim dictatorships — more than 50 when I last counted — where you’ll find old-fashioned values aplenty.

Where to even begin? Maybe with the fact that I’m not sure I’ve ever read an article by a woman bemoaning the right to vote. How about the way that Burchill relentlessly positions Muslim countries as retrogressive compared to the UK? (Although the only good thing she manages to come up with in the whole piece about women in the UK is that we have the right to vote, and the ‘choice’ to appear in Page 3! Way to set the bar low!)

Image shared by f.trainer, under a Creative Commons license