Take Back the Tech? 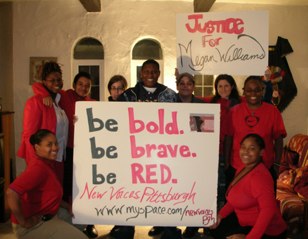 As Sokari blogged last week, we’re right in the middle of the 16 days of activism on violence against women.

But how can we use technology to further that activism? Take Back the Tech is an interesting campaign, and has been posting daily proposed actions, such as twittering about violence against women, and inviting folks to kablog with them. Personally I think it’s a great idea, but probably best suited to bloggers who don’t already post on a regular basis about violence against women.

bideshi blue is one of the bloggers that’s been taking part in Take Back the Tech, and I think her most interesting entry was today – when she went “off-script” and linked to this amazing video about the Be Bold Be Red protests against violence against women of colour in the US.

Actually this is a good example, I think, because it’s just using the internet to mobilise and spread the word about a fantastic offline campaign. While it certainly looks like the day of wearing red had a big impact on the day, videos like this can spread the thought and inspiration out across the (English-speaking) world. And, as bideshi points out, the website is stuffed full of amazing resources for anyone wanting to organise an anti-violence against women protest – interestingly, the video was titled “how to keep a social movement alive”.

And, given today’s news that 34 rapists or attempted rapists were let off with a caution this year (yeah, seriously), we need all the inspiration and ideas we can get.