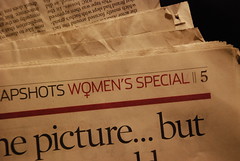 A good portion of today’s Observer Review was dedicated to the status of women in our society 80 years since women won the right to vote.

I’m quoted (very briefly!) in Rachel Cooke’s overview. She has some interesting things to say – not all of which I agree with, although mostly it’s a matter of emphasis. I’m not sure it’s possible to be surprised about misogyny and continuing sexism, when you read and write about it every day. I mean, just yesterday the Observer’s sister newspaper reported the names of seven teenage boys who gang raped a 14-year-old girl.

Anyway, it’s an interesting read, but I also recommend the Observer’s set of interviews on “What’s it like to be young, female and living in Britain?”

The women they interview include Yeukai Taruvinga – who ran a workshop at the Feminism in London conference earlier this year which really opened my eyes (even further) about just how terrible the whole asylum system is, and how the problems with it are gendered. She spoke about her own experiences, and it’s the kind of story that people really do need to hear so it’s great to see her profiled in the Observer.

Rania Khan – a Tower Hamlets councillor who also spoke at the Feminism in London conference(!) – was among those profiled too, along with Suswati Basu – who’s really involved in the London Feminist Network, and also helps organise Reclaim the Night.