Abortion doughnuts? Or is that ‘doughnuts on demand’? 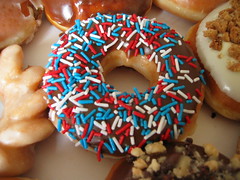 The US doughnut establishment Krispy Kreme has been “accused” of giving away “pro-abortion doughnuts”.

I kid you not.

Krispy Kreme plans to offer a “free doughnut of choice to every customer” on Obama’s Inauguration Day, to mark “American’s sense of pride and freedom of choice”.

The average person would probably interpret the use of the word “choice” here to mean “jam or chocolate sprinkles? with a hole or without a hole?” in the first instance and “you’ve just chosen a president!” in the second instance.

Actually, it’s be kind of sweet if Krispy Kreme did offer free doughnuts to celebrate women’s reproductive freedoms. (Although I’m not a fan, so if there was a choice of say, an abortion-on-demand brownie, or a pro-choice cupcake, that’d be picture perfect.)

However, I’ve got to say this is a bit suspect. Obviously the extremist anti-woman group is trying to catch media attention, what with the doughnut thing. It can’t be good press, surely, to overreact so massively? Maybe the idea is to try and push Krispy Kreme into saying they’re not pro-choice?

(H/T to Falka who sent in the link)

Photo by Jennie R. F., shared on Flickr under a Creative Commons license