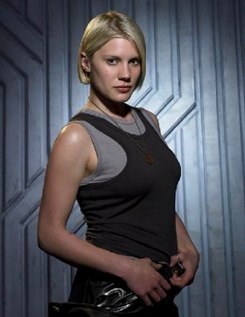 Dirk Benedict played Starbuck in the original Battlestar Galactica TV show, which aired in the ’70s.

He doesn’t share my opinion that Katee Sackhoff’s performance as Kara ‘Starbuck’ Thrace is one of the best things about the remake.

On the Big Hollywood blog, Benedict rants about the decision to make Starbuck a woman in the remake, and in general about how feminism has ruined everything, and wasn’t it better when “men were men and women were women”. Sigh.

He actually headlines the post: “Lt. Starbuck … Lost In Castration.”

The best minds in the world of un-imagination doubled their intake of Double Soy Latte’s as they gathered in their smoke-free offices to curse the day that this chauvinistic Viper Pilot was allowed to be. But never under-estimate the power of the un-imaginative mind when it encounters an obstacle (character) it subconsciously loathes. ”Re-inspiration” struck. Starbuck would go the way of most men in today’s society. Starbuck would become “Stardoe.” What the Suits of yesteryear had been incapable of doing to Starbuck 25 years ago was accomplished quicker than you can say orchiectomy. Much quicker, as in, “Frak! Gonads Gone!”

And the word went out to all the Suits in all the smoke-free offices throughout the land of Un-imagination, “Starbuck is dead. Long live Stardoe!”

Women are from Venus. Men are from Mars. Hamlet does not scan as Hamletta. Nor does Hans Solo as Hans Sally. Faceman is not the same as Facewoman. Nor does a Stardoe a Starbuck make. Men hand out cigars. Women “hand out” babies. And thus the world for thousands of years has gone’ round.

I’m sure I don’t need to spell out for readers exactly what’s wrong with what Benedict says. Maybe it’s a good sign, though, in a weird way – if Starbuck’s character has Benedict so riled, that’s because the writers are doing something right.

(The new) Battlestar Galactica is not perfect, by any means. (The Feminist SF blog pointed out an issue with the latest episode just the other day.) There are some problematic things about Starbuck’s character, too. But it does a lot of interesting things as well; interesting things that people like Benedict – who believe men are meant to smoke cigars while women churn out babies – find threatening to their world view.