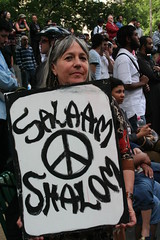 For those who missed the massive demonstrations that took place across the country last Saturday which Jess blogged about, there are more emergency demonstrations happening this coming Saturday.

For Londoners: assemble 12.30 at Speaker’s Corner, Hyde Park, for a march to the Israeli Embassy.

For those in Edinburgh: assemble 12:30pm East Market Street, behind Edinburgh Waverley Train Station for a march through the City Centre to the United States Consulate. Bring in-date medicine and spare shoes (for victims in Gaza I believe).

Further details on Stop the War’s site, including info on coach arrangements to London from all over.

There’s also daily protests and vigils across the country, including in:

Meanwhile, women’s groups continue to speak out about Israel’s attacks on Gaza, including the UK’s Muslim Women’s Network (formerly a project of the Women’s National Commission (WNC)). It wrote this open letter to the PM, highlighting how women face the brunt of violence in conflicts:

Finally we want to emphasise that the involvement of women in any peace negotiations is necessary. We would like to remind the UK about that On 31 October 2000, the United Nations Security Council (UNSC) unanimously adopted Resolution 1325 which recognises the disproportionate and unique impact of armed conflict on women as well as recognizing the under-valued and under-utilized contributions women make to conflict prevention, peacekeeping, conflict resolution and peace-building, and stresses the importance of their equal and full participation as active agents in peace and security.

And in my home city (Toronto), eight Jewish women were arrested after occupying the Israeli Consulate for several hours in protest at the attacks on Gaza. The group included Judy Rebick, former president of the National Action Committee on the Status of Women (NAC), and generally awesome feminist hell-raiser. The group’s press statement on their sit-in is here.

Update: While I still believe that posting a picture of something happening in the world is not necessarily endorsement or support, I am concerned that I have upset readers with the previous image used for this post, and have therefore changed it. I have also used this new picture because it was not clear from the previous image that the woman was at a protest, which was my motivation for using it in the first place. Thank you for raising your concerns.

Photo by Takver, shared under a Creative Commons license