What goes into time capsules? Old Feminist considers if the contents are skewed:

And I’m wondering how blind the contents of time capsules created today are about sexism and racism and other -isms. What gets included, and what is ignored. Everyday items — do they include female-identified objects like irons, lipstick, cleaning products, baby and child care items? Race- or culture-specific items like music, clothing and literature? Is everything neatly genderized or is there accommodation for people who don’t fit the stereotypes? Is the “average person” portrayed a young, conventially attractive one, like the nudes on the Pioneerspace probe plaque?

She also writes about the KEO project – which will see a message from “all humanity” – literally, there’s room for every human on the planet to contribute four pages – shot into space.

Ampersand links up an interesting article about why it is that white people read manga characters as white.

Zuzu reviews a weight-lifting manual aimed at women. Sounds like a mixed bag:

The goal of the program is to add muscle mass, build strength and burn fat, if necessary, due to the increased muscle mass. A lot of the advice is contrary to all the messages women get about getting in shape — for example, eat more! Stop doing so much cardio! Get more rest! Lift big heavy things!

Sadly, the book does contain reassurances that, no, you won’t get “bulky” if you lift weights over 10 pounds, because it’s hard enough for a man to put on muscle mass even with testosterone, and contains reassurances that you will *look* good. I say “sadly,” because it’s necessary to make those reassurances to women because of our cultural conditioning. Being strong isn’t enough of a goal in itself, not if you might take up space and not look good in your clothes. The author goes to some lengths to assure readers that the end result will not be mannish.

The first ever Equality Camp took place this weekend in San Francisco – an event set up to “begin to plan MarriageEquality2.0 so that all Americans and their families are treated equally under the law”.

You can listen to an audio recording of the event, or check out some fantastic photos. Started by comedian Heather Gold, Laughing Squid has posted a video FAQ about the event.

Meanwhile, Dustin at the Family Equality Council Blog posts about going home for Christmas, and his mother’s “proto-activist transformation”.

New York Times columnist Nicholas Kristof has written two pieces about trafficking of girls into sexual slavery in Cambodia. I think Renee at Womanist Musings response, and Ann Bartow’s responses over at Feminist Law Professors are spot on, both in terms of the benefits of this coverage (in highlighting the problem) and the limitations of Kristof’s perspective (particularly in stating that trafficking is primarily a problem in “poor countries”). Part One, Part Two.

Thomas at the ‘Yes Means Yes’ blog, writes about the policy on consent which was adopted by Antioch College in 1993, and exactly why it was mocked so much in the media at the time:

The Antioch SOPP makes clear who bears the risk: the intiator. That’s a big change, and one many men are profoundly uncomfortable with.

The BBC has been forced to replace a doll of a character in its hit childrens programme Night Garden, because they’d made it appear “too white”, reports The Guardian:

The commitment to alter the colour of the toy has been made to defuse an unlikely racism row, though the programme’s maker, Ragdoll Productions, insists the character is “not intended to represent a specific race or culture”. The BBC points out the existing toy is modelled on an animated version of the character that runs at the end of the show, which they say it is a lighter colour than the larger-than-life puppet that appears on the main body of the programme, which is aimed at pre-school children.

One parent, who did not want to be named, welcomed the decision, but said she did not accept the BBC’s argument: “The animation is only a tiny part of the show. All the dolls are very light. Obviously they are fantasy characters but [Upsy Daisy] does look like a doll with African heritage and that’s one of the nice things about the show. It gives children good role models.”

I think the Guardian’s wrong to describe this as an “unlikely” race row, though. As Kiri Davis’ film ‘A Girl Like Me’ made clear as glass, last year.

This is an interesting photo project:

Members of the University at Buffalo community were asked to sum up in a sentence or less on an index card what feminism means to them to present in a photo. These are just a few examples. Participants in these photos ranged from 18-71. 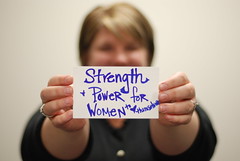 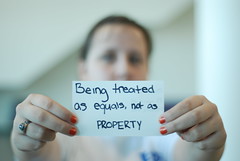 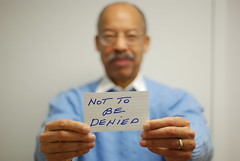