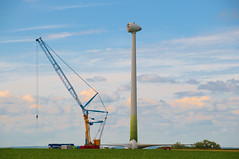 (I started writing this back in mid-December, but Katherine’s post at Feminist Law Professors motivated me to go revive it!)

It’s not just in the US that people are hoping more ‘green’ jobs will bolster the economy.

Of the 7,000 employed in the UK’s renewable energy sector alone, how many are women? How about the wider ‘green’ economy?

I don’t know, but I’d like to. My experience (as a reporter in this area) is that women tend to be found more on the lobby group/NGO side, and men on the business side.

Reasons why this might be the case? Maybe it’s because the people coming to work in these new industries often migrate from male-dominated fields, such as engineering, finance, construction.

In a National Review column, Linda Hirshman apparently said this:

President-elect Obama has stated that he wants to create 2.5 million green jobs in the energy sector to help rebuild America’s infrastructure — including retooling of public buildings to make them more environmentally friendly. But feminist author Linda Hirshman says those types of jobs — construction and engineering — are typically dominated by men, and she wants Obama to create jobs for women, too. Hirshman notes that women typically hold more positions in the area of social work, childcare, education, and libraries.

But this, to me, seems incredibly short-sighted. According to the United Nations, 6.3 million jobs should be created in solar power alone by 2030, with millions more in other areas of the green economy. So it’s not just about a temporary effort to create jobs in an economic downturn, it’s a permanent, global shift. And, yes, it does matter if a whole new major employment sector is created, and it just happens to become yet another field where women are marginalised.

The answer, then, can’t be to also fund jobs in “traditionally” female-dominated areas, in an effort to offset this – it’s to make a concerted effort to end this type of voluntary gender segregation in the workplace. It’s to make substantial changes so that green collar jobs aren’t jobs for the boys.

Photo by foreby, shared under a Creative Commons license