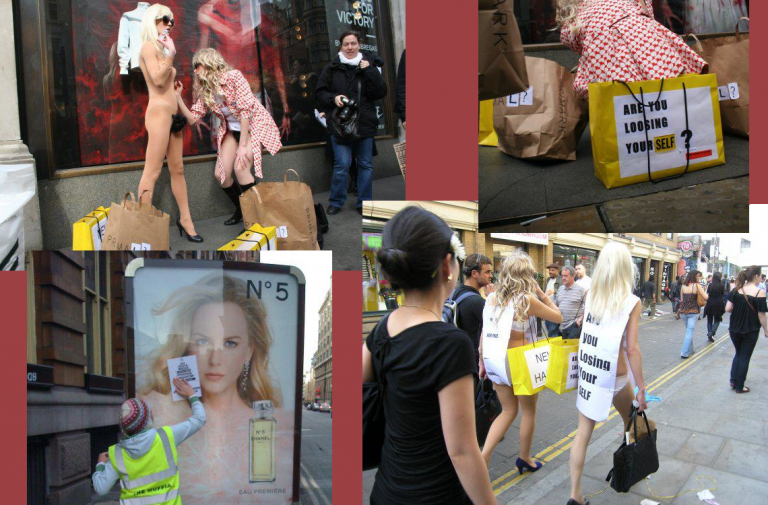 The Muffia are a group of feminist women “who create performance, comedy and political interventions in reaction to the culture we live in”. Their actions are intended to raise the general public’s political awareness, specifically in relation to gender, sexuality, identity and race, and judging from recent activities they certainly know how to draw a crowd:

Today we hit the streets of Manchester with our poster ‘Why is this alright? Why is this all white?’ We wore costumes to attract attention and with our portable music we danced outrageously to Motown and flashed our fake muffs and soon an audience gathered.

People began to ask us what we were doing and why (particularly young women) so we explained we were reacting to mainstream media images of women as white, thin, and cosmetically altered. We discussed the lengths women go to to achieve the current almost pornographic ‘look’. We also talked about the pressure for women to act, move and present themselves in a certain way and how we felt our dancing (which was about moving in a way we are told not to and taking up space) was a reaction to this.

Fantastic. They are currently focusing on their ‘Pit Stops’ campaign, which involves adding fake fur, posters and stickers to adverts on the streets, in shops, on public transport and to beauty products: We are trying to inspire people to question society’s relentless portrayal of a female which is mostly white, thin and hairless.

It’s a subject that’s close to my heart, and I absolutely love this in your face approach. You can see more pictures here, and I also really recommend checking out member Katie O’Brien’s performance protest against Topshop’s use of extremely thin models in its London window display, entitled I.D.B.I.D.E (I died because I didn’t eat, see right).