It’s sexist, but it scans so well! 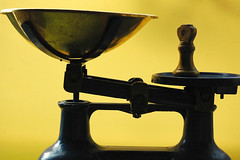 A throw away line in this Ellie Levenson column about exposing children to fairy tales and nursery rhymes really rubbed me up the wrong way. Writing in the Independent:

And while political correctness is generally a good thing if it means children are taught that sexism, racism and other forms of discrimination are wrong, I am very sad if this stops nursery rhymes from poetic scansion.

So, on the one hand you have stories which are ingrained with racism, sexism and a multitude of other problems.

On the other hand you have a line of verse that scans well.

The idea of sitting there, weighing these things up, offends me.

What Levenson is saying boils down to: “Oh, well, I can see this perpetuates misogyny, but on the other hand if we changed it, the line wouldn’t read so well!”

“That fairy tale is quite racist when you think about it, but it’s such a good read!”

(Note, I think that ‘original’ versions of fairy tales and nursery rhymes have a place – they’re part of our cultural heritage, and shouldn’t be erased because what they say is uncomfortable. But they need to be presented alongside a critical discussion of the reasons they’re problematic)

Photo by only alice, shared under a Creative Commons license