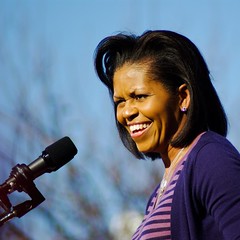 It’s not long until Barack Obama offically takes on the role of president. Just like during the election, the media has been focusing plenty on Michelle Obama – well, mostly on what she’s wearing and what she’s going to wear in future. Her dress for the inauguration ball will end up in the Smithsonian, according to Michelle Obama Watch. Designers are lining up to design her ballgown. Jezebel posted about how she’s even expected to save the fashion industry. Ann Coulter wrote a book attacking the first-lady-to-be. When does it end? Not any time soon.

That said, here’s a mini-round-up of some Michelle Obama-related posts, which go above and beyond fashion stories (and reactions to fashion stories):

As the future first lady, she is one of the most socially constructed individuals in the United States. When she isn’t being called angry, a baby momma, racist, anti-feminist sell out, ape, or unpatriotic, the world is trying to turn her into the next domestic diva. Michelle like all other first ladies is expected to smile pretty, speak when spoken to, refrain from expressing an opinion, while ensuring that the white house runs smoothly. We certainly cannot have a foreign head of state find a lump in their oatmeal.

The first lady has a lot of responsibility on a day to day basis, yet it is unpaid labour. Just like women’s work across the globe it is assumed that this is labour that she will be happy to perform for her husband. Why wouldn’t she want to work long hours for four years unpaid, isn’t that every woman’s dream? A nominal title does not erase the fact that this is labour exploitation. At this time we have never had a first husband but on the occasions that a president has been single, a female member of his family has always stepped in to play the role of first lady unpaid. Being the perfect hostess is supposedly a woman’s pleasure.

Instead of spending so much time focusing on what she is wearing, perhaps women should be asking the more pertinent question of why she isn’t going to be paid for the labour that she will be performing. We should be making connections between Michelle’s unpaid labour and the work that women do in the private sphere daily that maintains the public sphere.

Professor What If…? analyses some of the roles that first ladies are expected to take on, and how gendered they are – for example, first ladies are given the job of choosing the head chef at the Whitehouse:

While many First Ladies have taken strong political stances and served in ways far beyond that of “hostess,” this “wifely support” concept of the First Lady’s role still reigns. Much attention is paid to how she looks, dresses, acts, smiles, walks, etc, etc. Much criticism reigns down when she is seen as too strong, too political, too opinionated, too outspoken. Much better that she serve as presidential arm candy and meal planner! (For more in this vein, see my earlier post here.)

I wonder, if Hilary Clinton had won the nomination and was now president elect, would there be talk of who Bill would choose as head chef? Or, would this ‘womanly’ task be given to Hilary, Chelsea, or another female member of staff?

Michelle Obama Watch posts about a book of letters from African American women to Michelle. As Bridgette says:

Michelle has moved so many people all over the country by being simply who she is. She has a tremendous responsibility and at times, the load will be heavy.

This is only a small Michelle mention, but I think a pertinent one – Cara at The Curvature compares the way Obama’s been treated to the way Yoko Ono was treated:

Michelle Obama gets the Yoko treatment when people suggest that she has too much influence over Barack’s decisions, up to and including pushing those she doesn’t like out of the picture, and when Barack is criticized for having a wife with her own opinions. Everything old is new again.

Finally, Carmen writes about how you anyone can make a pitch for Michelle to come to their event.

Photo by zyrcster, shared on Flickr under a Creative Commons license