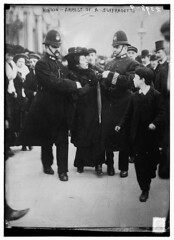 Suffragettes boycotted the 1911 census, refusing to fill in the form and writing notes in the margins, reports the Times.

Another glued a poster over the form stating: “No votes for women, no census.” A piece of paper stuck to the form suggests that the women stayed away from households where the census was taken to attend a protest in Trafalgar Square.

The public protest was reported in The Times on April 3, 1911, but its full extent remained hidden to the public. The report, headlined “A suffragist ‘campaign’ of resistance”, observed that almost all of those present at the Trafalgar Square protest were men. Women were granted the right to vote seven years later, although they were not given equal voting rights until 1928.

Frustratingly, the extent of the protest still remains hidden, because The Times doesn’t go into any more details about, say, how many census forms were spoiled in protest. (According to the 1911census.co.uk there is no definitive figure because, for example, many women simply evaded the census – but it estimates that “several thousand” took part).

“Votes for Women” is written in capitals across a return from 27-year-old Mary Howey, who calls herself an artist and suffragette living near Malvern, Worcestershire. Another has “No Votes for Women – No Census” stuck on a printed message across the return, with a handwritten addition: “No persons here, only women.”

What with this and the event zohra wrote about, on the two suffragettes who tried to post themselves to 10 Downing Street, hopefully 2009 is shaping up to be a year when we learn more and more about the history of the women’s suffrage movement…

Photo shared by The Library of Congress