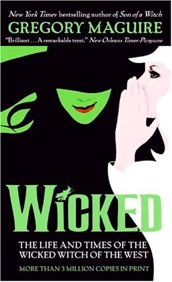 The Life and Times of the Wicked Witch of the West

I’d so far managed to miss out on Gregory Maguire’s revisionist fiction, but I was given an audiobook of The Life and Times of the Wicked Witch of the West this Christmas, and I’ve got to say I was impressed.

It sketches out the biography of the cardboard cutout “evil witch” in The Wizard of Oz*, following her through babyhood, via university and a stint as an Animal rights activist, up to her famous death scene. The Wizard is reimagined as a brutal dictator, responsible for genocide upon genocide in the subjugation of Oz.

It’s a project which has certain, obvious feminist-sympathies about it; simply in gifting the “wicked witch of the west” with a credible backstory. The concept that accepted history can stamp its own version of women’s history into the books, as well, is a familiar one.

I found certain things about it problematic, mostly, but not completely, relating to the ending.

But has anyone else read the book? What did you think?

*Disclaimer: I’m basing this on the famous film version, as I’ve never read the original books.