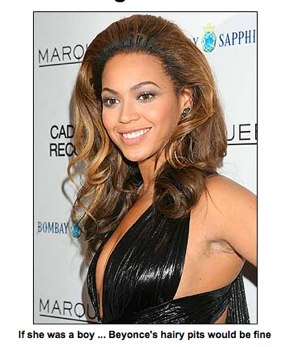 The Sun: Better not copy those celebrities and stop shaving your armpits!

You couldn’t accuse The Sun of being subtle, could you?

A number of high profile women, including Beyonce and Maggie Gyllenhaal have apparently appeared in public with a bit of armpit hair. Some of them even did so at fancy-pants red-carpet events!

What if any their female readers got the ‘wrong idea’ and decided to copy – after all, even by patriarchal standards, these women are amazingly gorgeous, and if they can pull it off, maybe armpit hair isn’t actually hideous!

So, the newspaper has a two pronged attack – a slideshow where they make ‘subtle’ digs about female celebrities armpit hair like:

“We are just Charmed that Alyssa makes no effort to hide her unshaven havens.”

“WE now know why you’ve never been kissed, Drew – it’s those fuzzy pits of yours.”

And a diary by a 26 year old they challenged to go two weeks without shaving, where she talks about how disgusted she feels, and also being shunned by various men. (Not surprising at all, given how prevelant the notion is that women must shave their armpits in order to appear socially acceptable, let alone attractive.) The piece finishes:

The A-listers are welcome to have hairy underarms, but I won’t be growing them again — it’s the pits.

So, there you have it, readers – don’t let those celebrities give you any fancy ideas about ditching the razor!

I don’t mean to imply that it’s necessarily ‘better’ or ‘worse’ to not shave or shave – whatever works for you. (Sometimes I do, sometimes I don’t.) Or to dismiss the negative reactions that women who don’t shave may come in for, in some contexts. But isn’t it interesting to see how The Sun reacts to a few celebrities appearing au naturale, armpit-hair-wise, by making snide comments and attempting to shame women out of it?