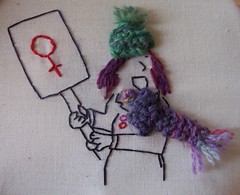 So what’s in store for us this year? What with the situation in Gaza and Shireen Ebadi’s trials which we’ve already blogged about here, it’s not a good start. There has been some good news though, including Joyce Bamford Addo becoming ‘the third most powerful person in Ghana’. Nice.

Closer to home, there’s much to consider as well.

The Centre for Women and Democracy informs us (via its e-newsletter, which is very good incidentally if anyone wants to sign-up) that 73 countries are going to have national elections this year, and it’s going to keep on eye on how women fare, with a special emphasis on what this means for the UK’s position in the league tables:

CFWD will continue to bring you news of how women candidates have fared in as many national elections as possible, as well as producing information on the European elections and the 2009 UK local elections. We will also continue to monitor how the UK is doing in relation to other countries – at the moment there are 68 countries with a greater percentage of women in their legislatures than us, but that may change as the year goes on. If there’s any country you’re particularly interested in, let us know and we will try and cover it.

On Woman’s Hour this past week, a panel including foreign correspondent Ann Leslie, assistant editor of the Financial Times Gillian Tett, space scientist Dr Maggie Aderin and director of Liberty Shami Chakrabati discussed ‘2009 – What’s in it for Women’. For some reason the ‘play again’ file won’t play on my computer right now, so if anyone has had a listen and heard something interesting, please let us know in the comments.

On the legislative side, the Queen’s speech has committed the Government to tabling a number of new bills and reforms this year, including changes to the licencing regime that affects lap dance clubs (success to Object and Fawcett’s campaign!), a new Equality Bill, Welfare Bill and Child Poverty Bill, and new rights on flexible working. Read Fawcett’s analysis of what they mean for women from here.

It’s also the centenary of a pretty cool piece of feminist activism this year:

On 23 February 1909, two suffragettes, Miss Solomon and Miss McLellan, posted themselves by express messenger to 10 Downing Street, in an attempt to deliver a message personally to Prime Minister Herbert Asquith.

Oh yes. Want to hear more? Attend the talk by the director of Fawcett on the role and use of the postal service in the feminist movement that’s planned for 26 Feb from 7-8 pm at the British Postal Museum and Archive in London. It’s free but you need to book. Call 020 7239 2570 or email info[at]postalheritage.org.uk if you’re interested.

Update: Actually I’d be quite interested in hearing what others think (or hope) this year will bring for feminism/women. What shall we wish/struggle for these next twelve months?

Photo by our very own cathredfern, who made this piece of art and then took the picture, shared under a Creative Commons license