Can someone explain to me….? 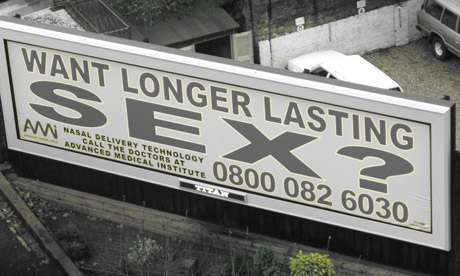 Interesting the ad had already been pulled by the ASA for direct marketing of pharmaceuticals to consumers (not allowed in the UK, instead you must market them to doctors instead). Now it’s been banned again as it might cause “serious or widespread offence” – yet when women complain on the same grounds about objectifying images they get told it’s not the prevailing public opinion. Interestingly that was exactly what the manufacturers argued in this case

The company claimed the wider context of content in lads’ mags, reality TV shows, the “commonality of graphic simulated sex on prime time TV”, and posters for films such as Sex Drive and Sex & The City, showed that the UK was “living in a much more liberal and tolerant age than, for example, 10 years ago”.

Of fascination here is that the target of this advert, according to the manufacturer, is men (“AMI said that “sometimes bold, arresting statements were the only way of successfully engaging men and promoting the availability of treatment and removing the perceived embarrassment or shame associated with seeking it”.”). I can only assume the same men (as in men in general) who are targetted by objectifying images of women in other adverts which are deemed by the ASA to not be offensive. Wierd, huh? Or is it just that the “prevailing opinion” is women are there to be positioned solely as sex objects, men’s sex isn’t to be mentioned as it’s too taboo?

Interesting given we now have “scientific” proof that if you present women as sex objects men process them cognitively as objects rather than people (different parts of the brain). Well, doh!