How we talk about fertilisation 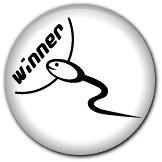 You may have read about feminist critiques of the story of fertilisation before, but if not Discover Magazine has a great overview in its archives.

They interview Emily Martin, an antropologist, and talk about her 1987 book ‘The Woman in the Body’. Although these critiques have been around for over two decades, the basic image of active sperm versus passive egg is still a familiar one, as the badge on the right demonstrates.

Ah, fertilization–that miraculous process to which we all owe our existence. Let’s review: First, a wastefully huge swarm of sperm weakly flops along, its members bumping into walls and flailing aimlessly through thick strands of mucus. Eventually, through sheer odds of pinball-like bouncing more than anything else, a few sperm end up close to an egg. As they mill around, the egg selects one and reels it in, pinning it down in spite of its efforts to escape. It’s no contest, really. The gigantic, hardy egg yanks this tiny sperm inside, distills out the chromosomes, and sets out to become an embryo.

Or would you have put it differently? Until very recently, so would most biologists. For decades they’ve been portraying sperm as intrepid warriors battling their way to an aging, passive egg that can do little but await the sturdy victor’s final, bold plunge. But the first description is closer to the truth, insists Emily Martin, a 47-year-old researcher at Johns Hopkins who has spent the past seven years examining the metaphors used to describe fertilization. Martin is not a biologist; she’s a cultural anthropologist. But her efforts to spotlight the male- skewed imagery that permeates our views of reproduction have placed her at the center of a growing debate about how cultural myths can turn into scientific myths, and vice versa.

It’s a fascinating case study in how gender stereotyping and sexism has hampered science:

Martin doesn’t suggest that these researchers willfully distorted their imagery. In fact, she notes that one of the investigators at Johns Hopkins was her politically correct husband, Richard Cone. What’s more, Martin concedes that she herself was slow to recognize the disparity between the discoveries at Johns Hopkins and the way the findings were written up. It didn’t strike me for a few years, she says. But innocent or not, she adds, the cultural conditioning these biologists had absorbed early in their careers influenced more than their writing: it skewed their research. I believe, and my husband believes, and the lab believes, that they would have seen these results sooner if they hadn’t had these male- oriented images of sperm. In fact, biologists could have figured out a hundred years ago that sperm are weak forward-propulsion units, but it’s hard for men to accept the idea that sperm are best at escaping. The imagery you employ guides you to ask certain questions and to not ask certain others.

Via Shut Up, Sit Down