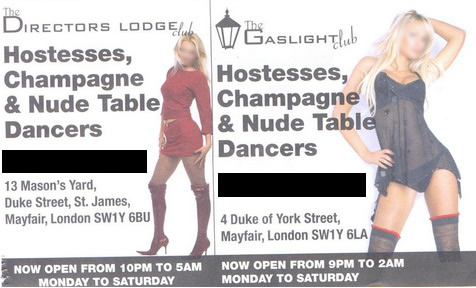 I was travelling home on Wednesday night, and hailed a Hackney carriage (a proper black cab, fully licenced, with the driver’s ID displayed etc etc) by West Hampstead station in north-west London to take me the short ride back to my house.

I’m never that comfortable in taxis by myself anyway, and this driver in particular made me feel uneasy. My feelings were compounded when I requested a receipt and was given a slip of paper with this advert on the other side –

I have, of course, complained to the Public Carriage Office, who are in charge of TfL’s management of black cabs. I’ll report back when I hear anything.

Edit (10/02/2009) – Thanks to a reader comment, we’ve altered the picture so that the faces aren’t identifiable and the phone numbers aren’t legible.

I got a response from the Public Carriage Office, apologising for my “unpleasant experience” and noting the incident down on file. From what they say, it seems that this kind of advertising would not adhere to the “general guidelines applicable to all London licensed taxi drivers”.