So first off, yes there are no depths to which PETA will not sink, 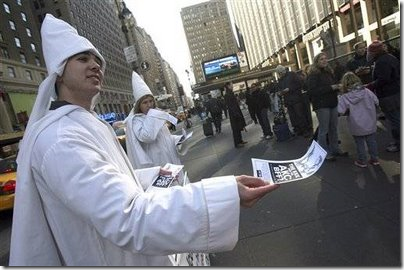 Yes apparently the American Kennel Club is much like the KKK according to PETA. Not sure how that analogy works, given I’ve not heard about the AKC lynching or burning bone shaped statues on pet owners lawns but there you go. I know we keep saying they are too easy a target but really, PETA, get a grip and work out offensiveness isn’t a good strategy. I can’t be the only vegetarian considering giving up that title because of you – I mean would sending “Not in My Name” messages help any? (This comes after vegetable sex adverts for the Superbowl ad breaks, “eggs are chicken periods”, BBQ-ing women, women as cuts of meat and naked women in sow crates. Obviously not content with, frankly, pissing off large numbers of women, PETA obviously has decided it’s time to be racially insulting too. JT at Pandagon has it best: PETA: Like Westboro Baptist Church for people who have a PETCO discount card.

Talking of which, as a Socialist and a Trade Unionist, I do sometimes dispare of what Union Leaders think is acceptable, Stroppyblog rightly named Derek Simpson of Unite as “Tosser of the Week” for melding racism and sexism in one single publicity stunt.

As Penny Red has highlighted, British Jobs for British Workers is a BNP vehicle.

Meanwhile a posh boys school is advertising itself not just for it’s educational achievements but that it’ll teach boys to get their leg over too, or at least to track down adoring bimbettes… 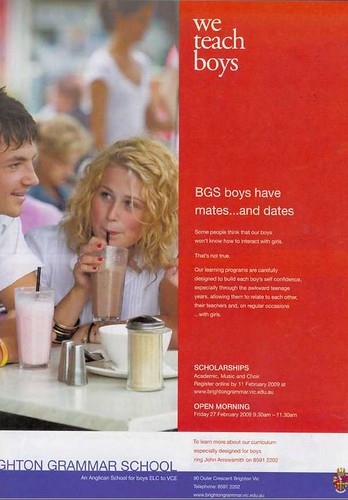 Not sure what their point is apart from maybe a too heavy emphasis that homosociality doesn’t mean homosexuality. (H/T to Hoyden).

Meanwhile in London based news Tessa Jowell is leading a gender equality at the Olympics campaign to allow equal access to sporting events. Londonist is rather dismissive, arguing we’re already short on funding for sports people so women shouldn’t demand a fair crack of the whip in events.

And even if we could, in theory, create a Games of total equal opportunity between the sexes, would we really want to put more pressure on the venues and logistics by adding an additional 40 events to the mindbogglingly complex preparation programme at this stage?

There’s wearing your male privilege credentials on your sleeve….

Also in London news is the sad story that Lambeth Women’s Project is in financial trouble. I’d also add so is the Feminist Library based in Southwark. Both are valuable and important causes.