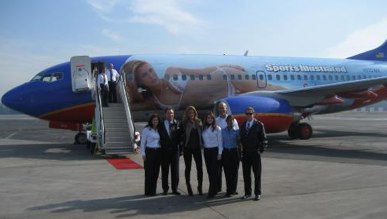 What’s with the aviation industry?

The Southwest Airline blog posted enthusiastically about how they’ve wrapped one of their planes with an advert for Sports Illustrated magazine:

This definitely seals the deals on Southwest Airlines’ FUN and edgy factor!

Err, well, that’s one way to see it. This is the same airline, of course, which chucked a woman off her flight because they considered her outfit too revealing.

Promoting SI on a plane is fine, but how about putting an SI cover with Venus Williams holding up a Wimbledon trophy instead?

Flight attendents don’t like this either, as you might imagine. In response to the last example, their US union said:

“For Spirit flight attendants, the sexist and shameful advertising that management continues to associate our carrier with is embarrassing and diminishes our role as safety professionals,” said Deborah Crowley, AFA-CWA Spirit President. “As the face of the airline to many passengers, it is embarrassing for Spirit flight attendants to work for a management team with such little regard for so many outstanding employees.