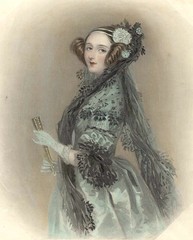 Today is the “international day for drawing attention to women excelling in technology”.

Ada Lovelace Day was started by Suw Charman-Anderson, who has been in tech for years, but only recently began to speak out about the issue of how male-dominated the tech sphere is. Today she wrote:

I’ve mainly stayed away from the discussion of gender issues in technology. I didn’t think that I had any real expertise to share. But over the last six months, after many conversations, it has become clear that many of my female friends in tech really do feel disempowered. They feel invisible, lacking in confidence, and unsure how to compete for attention with the men around them.

Then I see the stupid puerile misogynistic manner with which some of the more powerful voices in the tech community – some of them repeat offenders – treat women, and it makes me very cross indeed. The objectification of women is bad enough when it’s done by the media, but when it’s done by a conference organiser or tech commentator or famous tech publication, what message does it send? Nothing but “You will never be taken seriously, but we might take notice of you if you’re hot.”

So, what’s Ada Lovelace Day about? Ada Lovelace was arguably the first computer programmer, condensing and expanding the notes for Charles Babbage’s analytical engine in the 1840s. Although it was Babbage’s design, Lovelace was the one who saw its potential. Although there are, perhaps predictably, plenty of people ready to argue she didn’t contribute all that much to the history of computing after all.

But the idea of Ada Lovelace Day is to profile modern-day women working in tech. Women have been involved in tech since the very beginning and, even though the profession is male-dominated, they are still working in tech now.

Only a few days ago, Barbara Liskov became the second woman ever to win the prestigeous Turing award. She was also the first woman to get a PhD from a computer science department.

Yet many efforts to address the issue of sexism in tech come across as token and patronising.

I promised to take part months ago, but unfortunately I totally forgot to actually prepare anything specific. Obviously I use tech a lot – that’s what the feminist blogosphere is all about, after all. And it’s pretty crucial to my actual job, too. But what about women who are working in tech?

For me, I was lucky to have a lot of techy role-models early on, including one of my aunts – she taught student-teachers, the vast majority of them women, how to use technology in the classroom. If you were in primary school in the UK in the ’80s, you might remember learning how to programme those turtle robots? That’s one of the things she worked on, and we had stacks of them in my house growing up.

So, I’m going to leave this open: who are the women in tech in your life who’ve influenced you?

Image shared by adafruit on Flickr, under a Creative Commons license