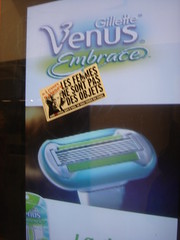 Sociological Images thinks Dora the Explorer’s make-over is no surprise, given how the character has been increasingly used to market gendered toys.

The US is to sign the UN gay rights declaration – see Lesbilicious for more.

Arizona wants to introduce a 24 hour waiting period before women can access abortion – Pam’s House Blend has the full story.

A new report has charted the victimisation experienced by trans kids in US schools, with almost 90% reporting verbal harassment, half had experienced physical harassment. As well as attacks from other kids, the report is pretty damning on the response from school staff, who seem to be ignoring and actually contributing to bullying:

Less than a fifth of transgender students said that school staff intervened most of the time or always when hearing homophobic remarks (16%) or negative remarks about someone’s gender expression (11%).

The government of the United Arab Emirates has launched a campaign to harass ‘masculine women’.

Renee at Womanist Musings posts about some fantastic menstrual calendars.

Armenian feminists are protesting the ‘red apple’ tradition, whereby after a marriage the groom’s family “inspect the bedsheets” for blood (to check, ineffectually, if their new daughter-in-law was a ‘virgin’). If there’s blood, they send the bride red apples. Activists are symbolically burying apples, to call for the practice to be buried too – see Jezebel for more.

Cath Elliot posts more examples of the sort of comments she receives at Comment is Free.

And, last but not least, the second Tell it WOC Speak carnival is up.

Photo by nova.zembla, shared on Flickr under a Creative Commons license