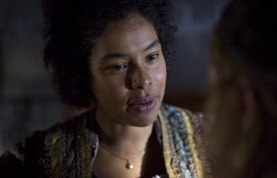 The Big Hollywood blog is up-in-arms about a BBC and PBS co-production of Oliver Twist*.

More specifically, the blog is up-in-arms at the perceived “vulgarising” of the book, by:

Yep, they are arguing that casting a black woman in Oliver Twist is vulgarising!

Now, it’s just plausible that Twist’s villain, the violent and vulgar Bill Sykes, would have an African-English girlfriend, but there’s not a hint of that in Dickens’s novel. Clearly the producers are imposing an ideal of a colorblind society on a story where it adds nothing, is unnecessary, and is quite a distraction for those who know the original novel. The character, however, is as complex and benevolent as in the original story, which is all to the good.

Thus, while being somewhat distracting, the transformation of Nancy into a black woman does no major damage to the story. Other changes, however, do, and some are really contemptible, all pushing in the same direction.

I don’t think this is an example of colourblind casting, it’s an adaptation. As in, adapted to chime in more with the audience, not transliterated directly from one type of media to another.

Perhaps Nancy’s character was white in the novel, but, as Feministe points out:

No word on whether it’s a travesty to cast a bunch of tall, fit celebrities with working teeth as Dickensian Londoners.

It’s fundamentally racist that some lack-of-historical accuracy (casting unrealistic white actors) goes unremarked, but casting a black woman in the programme is somehow “imposing an ideal”. Then there’s the patronising point that it “does no major damage to the story”.

This is not a problem for Masterpiece. This is a coup. It’s like if they’d gotten Emma Thompson for their version of Sense and Sensibility.

So it’s super-racism! Her skin color is not only more important than her ability to act Nancy, her career is beneath his notice because she’s a black woman.

Among the less offensive changes are the transformation of wealthy benefactor Rose into a Victorian female version of Sam Spade, aided by her housekeeper, Mrs. Bedwin, in forays into the mean streets of London in search of Oliver. Clearly this is an attempt by the producers to create another heroic female figure in the story, and the presentation of Mr. Brownlow, another benefactor, as impatient and too willing to believe Oliver a thief makes the point that much more obvious: Men bad, women good.

Again, I think this change has been made in order to present a story which many modern female viewers would probably find unsatisfactory, not to say irritating, if it was too close to the original.

However, the fact that the blogger equates “stronger female characters” with “portraying men as bad” speaks volumes.

Fagin, brilliantly portrayed by Timothy Spall, is a very obviously bad sort, although the producers seem intent on suggesting that what has driven him to crime is anti-Semitism, more than any choice of his own. They do, however, largely present him in his full, evil selfishness, lest the viewer fail to recognize the immense, consistent horribleness of the male sex.

Although I’ve not seen this programme, I frankly have a hard time believing that “portraying individual male character as bad” (just like he is in the book!) means “denigrating men as a sex”.

The anti-Semitism stuff is probably more related to needing to explain and contextualise the anti-Semitism of the character. Is Big Hollywood really arguing for a completely faithful depiction of Fagin? The Fagin of the original novel was an anti-Semitic stereotype.

Is the blogger arguing that it’d have been better for the BBC/PBS to do a faithful adaptation, anti-Semitism included, than an adaptation which portrays anti-Semitism as a bad thing and, to boot, casts a black woman? Hmm! I know what I’d rather my license fee was spent on…!

The worst of the lot, of course, is Bill Sykes, brilliantly portrayed by Tom Hardy (Band of Brothers). His Sykes is a good deal less powerful and formidable than the character embodied by Oliver Reed’s excellent performance in the theatrical musical film version, Oliver!, but he’s a thoroughly rotten villain, as in the original novel.

Even here, though, the producers introduce elements that water down the power of the original story. The characterization of Sykes continually introduces a strong element of anxiety in the character, suggesting a more modern point of view in which, as with Fagin, people are driven to crime by poverty. This reaches a ridiculous peak when Sykes deliberately hangs himself in one of the film’s climactic moments.

I have a tiny bit of sympathy for the blogger’s annoyance at this change to an actual element of the plot. But only a bit – nothing’s offlimits to change and adaptation, after all. But the idea that people didn’t think crime was related to poverty in Dickens’ time is just silly – it makes me think he’s missed the entire point of Dickens. Although his individual characters were often almost caricatures of good and evil (as in the case of Sykes), the social commentary in his novels is about the causal relationship between poverty and crime.

So, to sum up Big Hollywood’s complaints about this adaption: the cast includes a black woman, female characters have been given more satisfying roles, male violence has been highlighted, it’s been made less anti-Semitic and it suggests that crime and poverty are connected.

I guess there could be a legitimate complaint about some of this, but it’s not one Big Hollywood makes: you could argue that a production like this risks invisibilising racism, sexism and anti-Semitism in the book and in Victorian London, shying away from confronting the reality of history and Dickens to make them less offensive. But, well, it’s a balancing act, isn’t it? It’s a fictional adaptation (and it’s something lots of fictional adaptations do to one degree or another) not a documentary.

*Note: the BBC is referred to as the “UK-government-controlled British Broadcasting Corporation”. Heh!