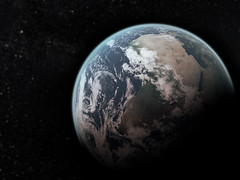 Yesterday was Earth Day across the pond, a day established in 1970 to foster awareness of the Earth’s environment. (Global Earth Day was on the March equinox).

No, this isn’t another moan about the general failure to consider the links between the environment and gender, and social justice and climate change.

To be honest, I agree with what World Changing said two years ago, that Earth Day “has become a ritual of sympathy for the idea of environmental sanity”, feeding into the politics of gestures, where we buy a wristband (or some ‘green’ products) to make ourselves feel better, but ultimately don’t make any changes.

But, well, this post by BFP highlights one example of what happens when environmental politics runs along on its merry way without a social justice analysis. In this case, BFP looks at environmentalists attitude to population control:

Some of the suggestions that have popped up as to how to lower world fertility rates have been contraceptives in the water, everybody who wants to be a parent has to “do something good,” and those who are “good parents” can have four or five children and those who suck can’t have any.

Oh, and women empowerment. Because, you see, when women have power over themselves they “make the right choice” and usually limit their fertility to population friendly numbers.

*THAT*, my friends, is how dangerous brown women having babies truly is. The destruction of the world rests on their vaginas.

Nonetheless, I like this idea at The Women’s Museum, to collect stories about famous women environmentalists. They’re focusing on women in the US, but in the comments it’s already gone wider than that. They’re planning to collect the suggestions in another post…

Meanwhile, Feminist Peace Network highlights an opportunity for activism for readers who are in the US, asking to write to your representatives urging them to sign a Congressional resolution on the impact of climate change on women.

This post by Aparna Krishnaswamy and Elizabeth Arndorfer, is also worth checking out, as they profile what US reproductive rights organisations are doing for Earth Day, in particular around the ways that pollution impacts on fertility.