Gist or Gette: how effective is direct action? 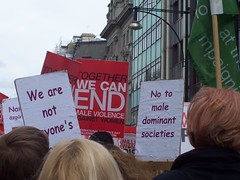 I’ve been ruminating on ‘direct action’ more than usual over the last few weeks. It was promted during my participation in Awaaz’s G20 march, and then hung out at the G20 protests. I had quite opposite experiences at each which has had me reflecting on how action translates to change, or not. Then, over the past few days, I’ve been debating the ethics and efficacy of the ‘pirating’ that’s been happening off of the Somalian coastline for the past year or so following this piece by Johann Hari. This morning I found myself reading about the stoning of some women who have been protesting the proposed new laws in Afghanistan.

My question: how best to express discontent and secure change for women from a system/people that are not listening?

At the Awaaz march, I went on my own, and hooked up with a friendly feminist activist as I walked along, and then lost them, and just kind of went with the flow. It was really positive and uplifting, with singing and music making and general hilarity as people got creative with their climate change costuming. It didn’t feel aggressive or negative at all. I left the demo feeling sad about the state of the world but happy about people’s willingness to speak out and try to make a difference in whatever small way they could.

At the G20 protests, I went along with a couple of inspiring feminists from the Women’s Environmental Network, hoping to touch base with one or two of our colleagues that were already at Climate Camp. By the time we got there, the kettling was already locked in, and everywhere we navigated to was controlled by the police in some way. They were heavily kitted up, with riot gear for instance, but also dogs and these vehicles that I can only describe as ‘army’ because of the way they looked like tanks. There were a few officers here and there speaking with activists, and some appeared to be friendly, truly, but on the whole the impression was one of ‘guarding’ with police generally grouping in packs and ordering people to go left or right or this way or that. It felt aggressive and male.

We eventually managed to get to London Bridge to exit it all, whereupon we found ourselves being corralled anyway: ‘please walk single file down the side of the bridge’. As I walked by the line of twenty or so officers that had spread the width of the bridge and were marching toward us in a line pushing everyone crossing to one side or the other, the guy officer ‘ordering’ us (it was definitely not a request) to walk single file etc barked at me ‘yeah, you’re smiling now, but you won’t be when a bottle hits you in the head’. Wonder if I can be stopped and searched for smiling?

My debates with my friends about the ‘pirates’ largely revolved around whether or not the pirating activity is justified and/or effective for the objectives – including what were the supposed objectives. There is a lot of energy going into shutting down the pirating right now by NATO and rich countries, but I’m not really reading anything about what is going to be done about the illegal fishing and nuclear waste dumping that European ships and companies have been engaged in, which actually created the initial impetus for the pirating. The local fisherman that are losing their livelihoods and the population that have become sick from the pollution, what of them? No stories either on how women are coping, whether they’re taking on the healing/support/livelihood work as everything unfolds and as some of these men go pirating.

So, what options, then, for the women who disagree with the proposed ‘women’s law‘ in Afghanistan? I have heard from more than one source that the changes offer more liberty to women than current tribal laws, but I think it’s fair to say that that’s still really sad. Better than the worst case isn’t really a great situation. What would it take to shift the paradigm, and how could feminists in Afghanistan make it happen? Is direct action a good option for them, stoning or no?

Photo by cathredfern, shared under a Creative Commons license