It’s official, Boris will not fund the promised rape crisis centres for London 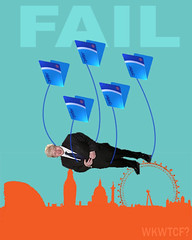 London Mayor Boris Johnson yesterday confirmed that he will not fund three new rape crisis centres for London, almost the only part of his election platform that had any merit.

We had wind of this back in December last year, but it’s not official. The Evening Standard reports:

But today the Mayor admitted that funding for the three new centres, which would supplement an existing centre in Croydon, would not be found in his budget.

His office said he was “assessing rape crisis need in London” and would ask the Government or councils to stump up the cash.

Labour Assembly member Joanne McCartney said: “This is a complete betrayal. Boris is promoting himself as a defender of women’s rights; behind the scenes he is reneging on his promise to fund new rape crisis centres.”

Green party Assembly member Jenny Jones said: “If you promise something you jolly well get on and deliver it. There’s a lot of back-tracking going on and a lot of women need these centres and need them immediately.”

As Rhetorically Speaking noted, it is somewhat… ironic… that this news came out during the launch of Boris’ strategy on violence against women. I haven’t yet had a chance to read the strategy, but you can see the press release here.

I’m sure it contains lots of other helpful stuff, if anyone wants to trawl through or comment on that feel free in comments!