One of those phrases that floats around the femosphere is talk about people “wanting a cookie”, in recognition of their great contribution to the fight against kyriarchy, through, for example, not raping anyone, or perhaps grasping some basic point of anti-racism 101. 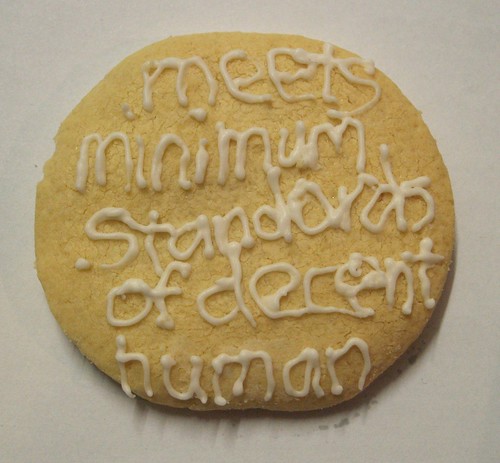 You can see the rest of the batch on Flickr.

What we are talking about is the expectation of, or the giving of, accolades to people for merely meeting the basic standards of non-misogyny. So you think women are people? Well yeah, that is great, but it is not exactly above and beyond the call of duty is it?

And yet, some people still do want credit for these basic things “but I am not a rapist!”, “I don’t hit women!”, “I read books by female authors!”. So to that end I made a batch of extra special tasty faminist cookies. All cookie images are usable under a creative commons non-commercial share-alike licence so feel free to distribute as needed :)