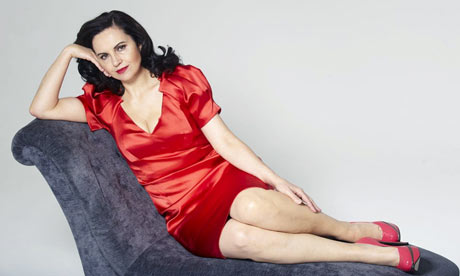 Last weekend the Observer ran an interview with Caroline Flint MP, and illustrated it with this image:

The Guardian website has further images of her modelling some ‘high street fashions’, to showcase ‘credit crunch chic’.

I raise this not to criticise Ms Flint. The issue I want to highlight is the discrepancy between how male and female powerful individuals are shown, how their body language, poses and expressions are often very different. We’ve discussed this on The F Word before at least once.

I mean, can you ever imagine a male MP or Minister being posed in such a way? Reclining on a chair, bare legged, one hand resting on his own leg, the other bent at the wrist, the back of his hand supporting his head?

This gives me an opportunity to show some images from a 2006 issue of Management Today magazine which a friend of mine* gave to me a few years ago, and I haven’t ever had the chance to share. The magazine’s issue was intended to showcase the top high-flying women under 35. These women were described as “the UK plc’s female leaders-in-waiting”.

Here are some of the images from the article. 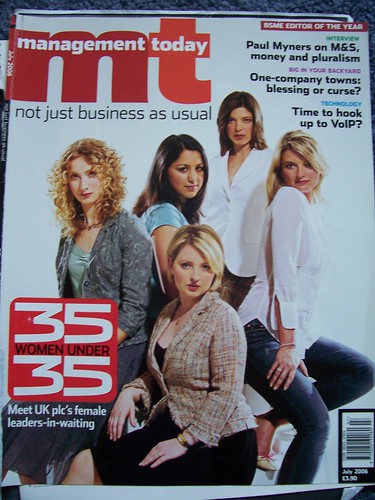 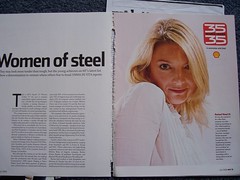 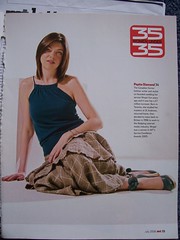 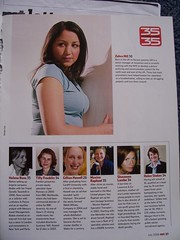 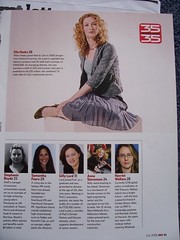 In contrast, on the following pages, an interview with then M&S Chair Paul Myners was illustrated in this way: 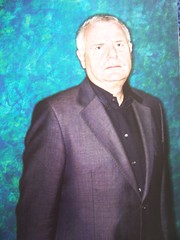 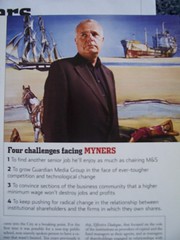 In the next issue of the magazine, the letters page was full of comment on this. One reader wrote:

It’s unimaginable that in a feature on men under 35 you would have had them pouting into the camera or lying languorously across the floor in a fetching singlet with an artfully composed, over the shoulder, come-hither expression.

It gives completely the wrong message – females in pouting poses tell me that they are achieving due to their sexiness. Is this the message you intended to convey? I cannot understand why five intelligent, determined and independent women allowed themselves to be used in this way. It looks more like the cover of a lad’s mag.

The article also included a letter from one of the women. She said:

When I appeared on the cover of MT, the response I got from clients and colleagues was unanimously positive. However, others criticised the piece for being ‘too sexy’. I have achieved whatever success I’ve enjoyed to date because I have focused on being professional and excelling at my job, not because I’ve tried to make myself look a particular way. The article (in my understanding) was trying to represent us as individuals rather than corporate stereotypes. I rather enjoy being a woman and feel no need to hide that in order to be taken seriously as a professional. It frustrates and saddens me that in 2006 some people still cannot see beyond what a woman is wearing to her achievements.

If you can’t see a successful businesswoman out of pinstripes and sensible shoes, then perhaps it’s you who has a problem with stereotypes.

This debate is certainly not new, and this particular case is a few years old now, but I hope this further example will be useful in demonstrating how women and men can be portrayed very differently in terms of body language, pose, clothing, and facial expressions.

What the solution to this is – or even if there needs to be one at all – will surely be a matter for continuing debate.

As one reader commented to MT,

Please reassure me that this is not going to be your style in future. I am not seeking balanced coverage either – the thought of your next cover having Alan Sugar posing in his skimpies is too much to bear.