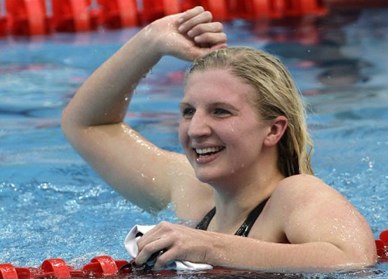 Rebecca Adlington, the pressure to be feminine

19-year-old Rebecca Adlington won two gold medals at the Olympics in Beijing. The Daily Mail ran an interview with her, including 14 photos of her posing, all glammed up, next to the pool.

And, rather than talk about her accomplishments, the article focuses on the pressure she felt (and still) feels to be feminine, and how her ambitions as a swimmer have collided with social expectations. Of course, it’s not like the Mail ever appoints itself the gender police, or feeds into those pressures at all, is it!?

‘Do you know why I like shoes? They make me feel feminine. My shoulders stand out and people always say, “Aren’t they broad?” And I think, “Thanks! You are really making me feel better about myself.” I don’t hate them, but I’d like to be more petite.

‘Without them, though, I know I wouldn’t have the power I have – they are what makes me go so fast in the water – but out of the water, they definitely look better with a nice pair of shoes,’ she says with a laugh.

Which just makes me despondent to read. But not as much as this quote:

When the pictures have been taken and it is time to part, I wish her luck in the award next month, adding that she is a fantastically charming and glamorous ambassador for her sport.

‘Me? Bring glamour to the sport? I don’t think so. I looked dreadful at the end of my 800 metres when I pulled my hat off and the wet hair was flopping in a face bare of make-up. Awful!’ she says with a long hearty laugh.

That is how she describes the moment in Beijing when she won the gold medal. Why?

Maybe this is the Mail’s reporting and not what she really meant, and they’ve exaggerated her concern about this, certainly I’m sure that’s not her only or primary feeling looking at the photos of her setting a world record. Maybe she was just trying to be modest. But still…

Incidentally, the story also reveals that Adlington is living on a £24,000 a year lottery grant, once recently doubled from £12,000. As the Mail points out, “the average Premier League footballer earns £21,000 a week”.