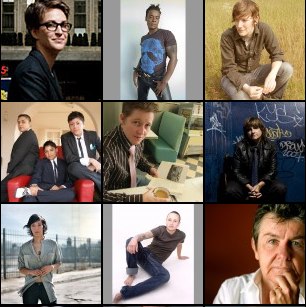 Following criticism of the inclusion of trans men in the list, at Sinclair’s place and in Feministing’s comments and elsewhere (including in the comments of the original version of this post), she has removed those trans men who have not specifically given their blessing to be included.

So here’s the thing about the internet: the critical feedback is immediate, and publications are, unlike print, not static. Things do not have to stay the same.

I have decided to remove transmen from the list of Top Hot Butches, and I sincerely apologize to all who felt insulted by their inclusion. I did not want to hurt anyone’s feelings, and I understand how it was hurtful, despite my intentions.

I did expect some disagreement about exactly this, but I did not expect this level of discourse, discussion, openness, and productivity in the response. Look at Feministing, and also at Sugarbutch threads here & here, and the comments on the THB site itself. I also thought I understood my own reasons for the inclusion of transmen, and that my reasoning could hold up against criticism, but in the past three days, I have felt that it does not, and that many of the critiques are right.

(And you might also want to check out this response by Jiz Lee, who is on the list)

Meanwhile, prior to this, F-Word reader Sebastian sent in this contribution, which I’m posting here still because it sets out really clearly some reasons why people objected to the original list. However, Sebastian asked me to add: “Since this was written Sinclair has responsed to similar critiques from elsewhere by removing trans men from the list, and issuing this statement, which I feel has addressed my problems with the orginal list”:

At first glance this list of 100 Top Hot Butches by Sinclair Sexsmith seems harmless enough. Whilst any list which focuses on hotness as a metric is potentially objectifying, as a response to the After Ellen Hot 100 being mostly populated by young, slender, white, femmes, I can see why it could be a positive thing.

The compiler of the list obviously has some idea that grouping all those labels together as butches might not go down terribly well, and attempts to explain the reasoning behind it, but if anything makes it worse. In particular the phrase “I am using it instead of another term … because I think it is the most accessible and recognisable word representing some sort of female masculinity” is shockingly dismissive of trans men’s identities.

We don’t have female masculinities. We have male ones. And why? Because we’re not some kind of extra-special super butch women. We’re men.

The fact that Sinclair states “I mean absolutely no offense to anyone on this list” doesn’t suddenly make it inoffensive to slap labels on us that we haven’t chosen. It doesn’t make it any less hurtful to be told that we’re not the same as other men, that we’re united to a list by the very accident of birth that we’ve chosen to reject.

I think it’s great that people are celebrating female masculinities. It’s fantastic that the conventions of what makes a woman attractive are being challenged. I just wish that a group which has so often been dismissed as “not really women at all” would stand up for themselves without suggesting that I’m not really a man.

So, what about the list itself? Sinclair says it was direct response to After Ellen’s Hot 100 list:

Yet again, readers of After Ellen chose their top hot list based on contemporary standards of feminine beauty, with a little bit of lesbian pop culture thrown in. Not to mention that the list featured primarily white, straight, young women, primarily from the US. And in this, the year of Rachel Maddow, of New York Times articles on butch fashion, there were fewer than a dozen androgynous, butch, or masculine folks represented on this list.

Hot lists have a bad reputation. And, well, for good reason: aimed at straight men, highlighting and ranking women in the public eye for how conventionally attractive they look, there’s really so much wrong with most of these lists that, well, you could probably write a list of 100 reasons to hate 100 hottest women lists.

There’s been a fair deal of push-back, though. Including the now defunct(?) REAL hot 100 list, which highlighted young women in the US who were “doing incredible things in their every day lives… battling the popular notion that all young women have to offer is outward appearances”.

So, is Top Hot Butches a bit objectifying? The answer, for my money? Well… yes, maybe a little bit… but, Sinclair says:

Being objectified has been an important step on my own way toward gender identity development: being seen as attractive and desirable by others, and seeing representations of people like me in culture who are also desirable, has helped me feel more confident and strong about my own gender.

There is, of course, a constant flow of images in the media validating, and pushing, women embracing femininity (implicitly or explicitly for men, depending on the context), and there’s still most definitely a need to acknowledge and celebrate butch (although this list is also about a broader spectrum of identities). I also like that Sinclair’s list is not just confined to the young and white.

Actually the list (at least the first half of the list) is just as much about what those listed have done as how hot they look. And your Maxim-type list is offensive, not just because it’s objectifying, but because it’s pushing attractiveness as one, single specific ideal (even, kind of ridiculously, pretending that it’s possible to ‘objectively’ identify the hottest woman on Earth). Efforts such as Top Hot Butches should help to disrupt that…