European elections, beyond just not voting for the BNP 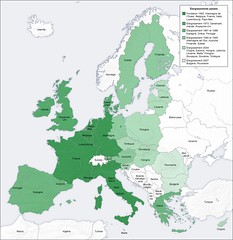 The pressure is on to keep the BNP from gaining seats in the European elections on Thursday. Voting for other parties makes it harder for them to gain ground – and, especially if you’re in the North West, where the party needs just 9% to get a seat, which will be much harder to achieve if the turnout is high.

I keep hearing this idea the people should be voting for anyone but the BNP, just to keep them out. Hmmm, well, I think that needs re-examining – some of the alternatives are not that much better.

In particular, UKIP (the UK Independence Party) is set to make major gains – according to one poll, the party could gain 19% of the vote.

But let’s remember, UKIP wants a “a five-year freeze on immigration into Britain” and wants to withdraw the UK from the European Convention on Human Rights. In fact, it wants to totally disengage from the EU.

As do the Conservatives, who have said they will leave the ‘mainstream’ right wing party in the European Parliament. As Polly Toynbee points out:

There is little difference between Conservative and Ukip votes – both open the EU exit door. The pro-European Tories came out to warn that David Cameron’s promise to take his party out of the centre-right grouping in the EU parliament will lead down the Ukip road to total disengagement. A British government inside a ragbag of Gypsy-bating, gay-bashing outcasts will smear our reputation. Leaving Angela Merkel and Nicolas Sarkozy’s mainstream group will make future EU dealings infinitely harder. Why should other countries grant the endless compromises and opt-outs Britain has insisted on? Should those exemptions be refused, it would ignite yet more anti-European virulence.

It was a UKIP peer who invited far right Dutch politian Geert Wilders to the UK – Wilders “wants a vast and vigorous extension of state controls to halt immigration and crack down on expressions of the Islamic faith within Dutch society. He has advocated that all Muslims be offered money to return to their own countries”.

What are they like on gender? One of their MEPs, Tim Worstall, wrote in the Guardian that attempts to close the pay gap and workplace discrimination are “sexist” and “racist”. He said:

I’m not in favour of this attempt to wipe out structural discrimination: that’s something that we’ll not only never get rid of, it’s something we really rather want to have anyway.

Then there’s what happened back in 2007, when another UKIP MEP, Godfrey Bloom, was named to European Parliament Committee on Women’s Rights and Gender Equality. As UKIPWatch reported at the time:

Proudly proclaiming that he would be representing “men’s rights” on the committee, Bloom made clear his views on a number of gender equality issues.

On maternity leave, he said that “[if] you want to have a baby, you hand in your resignation and free up a job for another young lady”, explaining that he would like to overturn EU maternity legislation if his position allowed. He said maternity laws that gave women six months of paid leave and the option of another six months unpaid leave, had resulted in women losing jobs and employment. Many businesses only employed women over 40, he said.

“Regulation in protection of women is all well and good in academic and government circles. If you’re a small business, you’d be a lunatic to hire a woman of child bearing age.” A party spokesman then backtracked from Bloom’s position, suggesting that an exemption for businesses with less than 20 employees could solve much of the problem.

He also claimed that he wanted “to deal with women’s issues […] because I just don’t think they clean behind the fridge enough.” He added: “I am here to represent Yorkshire women, who always have dinner on the table when you get home.”

The report Holly linked by the European Women’s Lobby is well worth a read if you’re still deciding how to vote, and want to know where the parties stand on gender issues (notably absent from campaign material I’ve seen!)