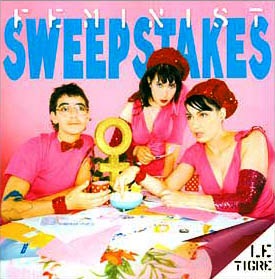 Le Tigre not broken up, working with Christina Aguilera

Le Tigre, it transpires, have not broken up!

They are collaborating with Christina Aguilera:

The pop-star/punk-rock team-up was first reported by blogger Perez Hilton. “Just ran into [Le Tigre member] JD Samson, my not-so-secret crush,” Hilton wrote on Twitter. “JD tells me Christina is working with Le Tigre on her new album! OMG!” As OMGs continued to rattle across the blogosphere, an official band representative confirmed the news to Pitchfork.

I hate to just add my OMG to the blogosphere, but, well, why resist: OMG!

It’s true, we’re not playing shows right now BUT we for sure did not break up. I just haven’t felt like being in an active band for the past couple years. I was on the ‘playing shows and making records’ treadmill for over 17 years and that is a long time to do the same thing over and over and over again. Like that movie Groundhog’s Day, I eventually needed to wake up and have it not be the same day…

The other project I have going on is making a dvd about Le Tigre with Jo and JD and our friend Carmine. We’re hoping to have it out by next year. Will we ever write another album? I don’t know. Will we ever play a show again? I don’t know. But I still feel like Jo and JD are my bandmates, so to me, that means we are still a band even if all we are doing at the moment is making a dvd. I know it sounds cheesy to say “we’re on hiatus” maybe “sabbatical” would be a better word. Either way, I am loving my time off and think it is a great thing to change things up now and again.