Women are up to seven times less likely to report homophobic and transphobic crime to the police than men, according to a survey by the Met.

The survey, which builds upon 2002 research conducted on behalf of the Home Office, specifically examined women’s experiences of violence and abuse enacted on the grounds of sexual orientation and gender identity.

Independent research shows that although the rate of reporting to the police is different between men and women, the incident of homophobic crime is similar for both sexes.

Black Women in Europe posts a call-to-activism over Italy’s increasingly worrying race laws, including bans on mixed marriages and around recognising children at birth:

The children born to “undocumented” foreign women, by virtue of a political decision by a temporary majority, shall be for their entire lives the children of unknown parents, they may be removed from their own mothers at birth and placed under the care of the State. 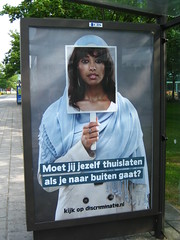 Muslimah Media Watch calls attention to this interesting anti-discrimination campaign in the Netherlands.

The tagline is roughly “Do you have to leave yourself at home when going out?”

The second reason why I love this image is because it completely reverses the looker’s expectation of hijab. Instead of the hijab hiding some aspect of the woman, it is society’s pressure for conformity that is making the woman hide an aspect of herself. The discrimination that woman is receiving, which in turn is discouraging her from wearing hijab, is damaging to her, not her hijab. In fact, the hijab is given a role of liberator in the ad. By not discriminating against the woman for wearing hijab, by letting her wear it, we are liberating her to be who she wants to be in the public sphere. The ad stands out for me because of its simple imagery and symbolism.

Interesting concept! You can see the other images mentioned on the campaign website.

Ultra Violet blogs about a thought-provoking piece of activism, which involved putting warning tags in key feminist text ‘Feminism Without Borders’, by Chandra Mohanty, which said this:

“As of 15 November 2007 the book you are holding has been deemed ‘Elevated Risk’ in accordance with the USA Patriot Act as per National Security Surveillance Act and Department of Homeland Security regulations. By checking out this book from the library, you may be subject to exceptional deployment of certain surveillance measures from the US Department of Homeland Security.”

Although put there by students not Homeland Security, but prompts some interesting thoughts about fear of feminism.

Anna at Jezebel considers the limits of the idea of meritocracy in the education system. Given all the moaning about too many people going to university in this country, I thought this was quite refreshing:

do we really need a way of determining beforehand who will be good at the job of being a college student? Does our current admissions system, in which the best schools try to pick the best students, before most of them have even taken a college class, really make sense? What would happen if everyone got the same college education?

Sinclair has posted a call-out from Esther Rothblum, a women’s studies professor at San Diego State University, who is looking for lesbian and bisexual women to interview about butch and femme identities:

Lesbians and bisexual women have used the terms “butch” and “femme” for over one hundred years but the meanings of these terms are vague and complex. I am looking to interview women about what butch and femme means to them, including women who don’t like these terms or don’t use these terms. I will focus on women in specific age groups (20s, 30s, 40s, 50s, and over 50), those who are single and in relationships, in rural and urban settings, and from diverse ethnic and racial groups.

Via AfterEllen, a new web TV series is due to start in September, meant to reflect reality for lesbians in the UK today.

“With Far Out, I wanted to show what life for gay women is really like,” Hughes said. “That we have real and valid relationships, that we can be butch dykes or girly girls or anything in between, that we have kids, responsible jobs, families, ambitions and aspirations. We can honestly say that we are telling our story from experience, this isn’t a group of men sat in a board room making a series for money.”

You can see the teaser on AfterEllen too, or check out their website.

Sociological Images calls attention to a particularly bad advert for paint, which illustrates “disdain for older women”. Post may be NSFW.

The entire premise of the franchise fetishises primogeniture, heredity and aristocracy: the Wizarding world is a glittering ubermensch, and those lucky enough to be born into it are destined for a life more resplendent and exciting than anything the rest of us Muggles (non-magical humans) can hope for.

Feminist Review reviews a book of poems from the women’s liberation movement.

Photo by Nirel, shared on Flickr under a Creative Commons license