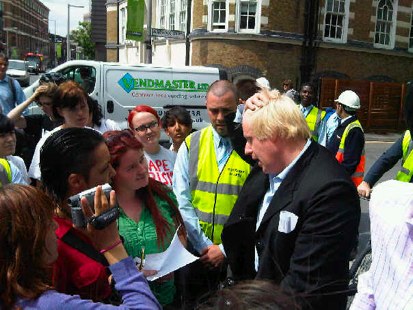 Boris caught by the wheel, questioned on Rape Crisis funding

Clare Solomon, a former co-president at SOAS university students union trapped Boris’ front bicycle wheel as he tried to sneak out of a back entrance to the Greater London Assembly offices at City Hall.

She told the-sauce.org: “We were really pleased we got the chance to question him face to face about funding for rape crisis centres.

“However, he continued to bluster and wobble all over the place and would not give firm assurances about how much funding would come through and when. This will be a huge disappointment to thousands of women who really need support.”