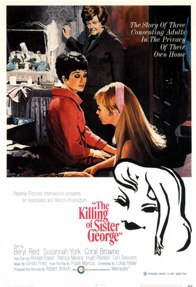 Queer feminist film festival Club des Femmes organised a screening of The Killing of Sister George during Pride. Here, co-curator Sarah Wood reflects on how the film fares more than 40 years since its release

Watching The Killing of Sister George at the end of 2009 Pride week was a revelation. At Club des Femmes we’d chosen to re-screen Sister George and Wolf Rilla’s The World Ten Times Over. It was our response to the Mayor’s Story of London project. A city changes so fast, it’s sometimes important to stand still for a moment and imaginatively sift through the layers of cultural sediment to understand quite how you ended up standing where you are. It’s a way of getting your cultural bearings.

Club des Femmes enjoys this kind of archaeological excavation. For us context is everything. This year we ended up in the swinging sixties pre- and post-decriminalisation. Watching The World Ten Times Over you could be forgiven for thinking that lesbianism didn’t exist. The clues are there if you watch for them carefully but nothing is explicit: revelation pre-decriminalisation had to come through performance, in moments of gesture and the subtle shift of feeling in expression. Watching it with hindsight this summer was telling. It revealed the intensely coded, hyper-vigilant culture in which any same sex relationship had to operate. The Killing of Sister George, post decriminalisation, by contrast was a relief.

The Killing Of Sister George is a revelation because it is so upfront. It is simply a complex drama that focuses on a lesbian relationship. It is radical because of that, because of its directness and because the film uses real lesbians as extras and real locations to add an air of authenticity. A culture that was previously hidden is revealed.

This is a film about coming out to a world used to secrecy, hints and suppression. This is the film’s triumph and also its tragedy. Watching the film 40 years on it’s terrible to observe the moment when visibility begets a new conformity. Where in The World Ten Times Over there is a separation between convention in the outside world and the possibility for unconventional relationship shapes in private, in The Killing of Sister George we witness what happens to the kind of lesbian who doesn’t play along with hetero norms. We are simultaneously watching the formation of stereotypes (the evil exploitative lesbian in Coral Browne’s Mrs Croft, the ingénue in Susannah York’s Childie who both conform in some ways to recognisable codes of power) and the elimination of the person who doesn’t fit in, in Beryl Reid’s George. Mrs Croft and Childie, attractive, fashionable and sexual, can survive their new-found visibility. They define the kind of lesbian that can pass successfully in the new world, who conform to convention – youth is rewarded, beauty, wealth and power. Humour, masculinity in women, the taint of class, are all shown to be despised.

In this way, the new-found lesbian visibility in the ’60s is simultaneously exploited and critiqued by the film. George’s impotent isolation at the end is not simply a result of character, it is a perfect image for what happens to those who do not play the game. I had only ever seen the film before on TV. It was a great experience to watch The Killing of Sister George with a diverse modern audience. In an age where lesbians in cinema are still the vampires to be slain, the punchline to male jokes, it was great to critique the pressure to conform communally.